Jeju Island, January 30-31, 2009
Tim Edelsten came down for the weekend in search of two grey Jeju specials - Grey Bunting and Pacific Reef Heron. The former wasn't found at a once-quiet spot near Jeju City, and we only got a brief glimpse of the latter the following day in a continual downpour. Was good to hang out with Tim though.

Shiwha (Near Seoul), January 25, 2009 (With Tim Edelsten)
I met up with Tim Edelsten on a frigid trip up to Seoul - meeting my fellow first Birds Korean after birding in Korea for years! At first he questioned my dubious headgear choice (may have been a rainbow tuque), but we got on fine.
Usually quite serious, Tim practically levitated with ecstasy after getting scope views of two Long-tail Ducks. We also had a dozen White-tailed Eagles on the ice, a Chinese Grey Shrike, and a decent waterfowl assemblage, but my favoured encounter of the day was with an enchanting flock of Chinese Penduline Tit, which had Tim scratching his head and giving me the side-eye, ha ha.

Seogwipo, Jeju island, January 17, 2009
A glorious warm day for birding in Seogwipo. Over the harbour, an Osprey hovered and glided for several minutes, while a Black-throated Loon bobbed in the water close to shore. Two flocks of about 20 Dusky Thrush were seen in bushes overlooking the harbour.
A short distance away, there was a lot of bird activity in a ‘resting place’ along a small river. Common and Green Sandpipers, a Striated Heron, several Spot-billed Ducks and a Common Kingfisher were spotted in and around the river. Both White and Grey Wagtails, and Olive-backed Pipits paced on the grass.
In the trees and bushes nearby, a Yellow-browed Warbler was seen near some Japanese Bush Warblers, while Japanese White-eyes moved actively through the treetops.


Bird News from Matt Poll & Mike Balfour
Hado-ri and Seongsan-po, Jeju island, January 4, 2009
Chilly and overcast, but a great day for birds, with 45 species listed. At Hado-ri, huge numbers of Eurasian Wigeon, Tufted Duck, Coot, Common Teal, and Temminck’s Cormorant were seen. Smaller numbers of Common Shelduck, Northern Shoveler, Gadwall and Common Pochard were also seen. Several Dusky, Pale, and White’s Thrush were found in the scrub at the water’s edge.
We were surprised to see a Black-crowned Night Heron and winter-plumaged Chinese Pond Heron flush simultaneously from a large ditch. An immature Greater Spotted Eagle circled above a small hill, while a Peregrine Falcon and Osprey hunted nearby. A single Black-faced Spoonbill paced up and down the shore with several Great Egrets. Eight Northern Lapwings and a single Common Greenshank were seen near the road as we were leaving.
At Seongsan-po, similar large numbers of ducks were evident, with several Pintail and Common Goldeneye seen. A handful of Meadow Buntings, and Grey-capped Greenfinch were seen in undergrowth near the sewage plant. 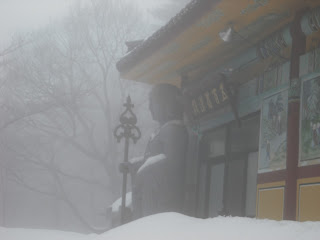 Seogwipo, Jeju island, January 3, 2009
A beautiful warm and sunny day in Seogwipo. Thirty species listed for the day, five of them lifers for me. Noisy Japanese White-eyes and Brown-eared Bulbuls seemed to populate most of the overhanging trees. Common Sandpipers, lugens White Wagtails, Grey Wagtails, and Blue Rock Thrushes were plentiful by the harbour. Two Pacific Reef Herons hunted patiently by some tidal pools. Two pairs of Great Crested Grebes could be seen a bit further out from the shore. Several Common Kingfishers, Little Grebes, Pale and Dusky Thrush, Bull-headed Shrikes, and Large-billed Crows were also seen in the area.
Cheonjiyeon Falls held some interesting species, such as a single Coot, several Gadwall and Common Teal, and at least 30 Mandarin Ducks on the rocks opposite the falls. Several Japanese Bush Warblers were spotted amongst some wet rocky scrub, loosely flocking with Japanese White-eyes. Spot-billed Ducks and Mallards were plentiful at both locations.

(*Note: This is a “historical post.” Whereas I started birding in Korea in 2005, this blog has only been active since early 2012 - these posts are an attempt to consolidate my early birdventures from the various blogs and websites where they reside, largely from the “Archived Bird News“ section of Birds Korea’s excellent website: http://www.birdskorea.org/Birds/Birdnews/BK-BN-Birdnews-archive.shtml. Find more historical posts by clicking on the "Historical posts" tab at the bottom of this post.
For this post, most of images are lamentably poor-resolution screensaves, as many of the original photo files were lost in the infamous computer crash of 2011.)
Posted by Matt Poll at 7:42 PM No comments: