Bird News from Matt Poll and Youngho Kim, West Coast, Jeju island, October 18, 2010
A rare visitor to Jeju has caused enough stir to land it on the evening news! On a hazy morning, a massive Oriental Stork paced slowly through a small wetland, in the company of six Grey Herons. 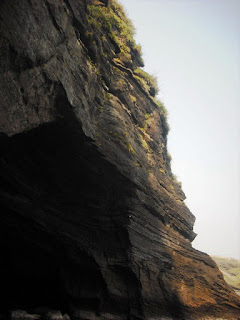 Jeju island, October 17, 2010
On Udo Island, a dozen Temminck's Cormorants dried their feathers on rocks, as a Northern Lapwing flew overhead. On a mountaintop, a half-dozen White-throated Needletails whizzed past so close I could hear the 'woosh' of air they made. A dozen or so Barn Swallows were also spotted here. A small agricultural plot held about 20 Eastern Yellow Wagtail. Also seen on Udo were several Japanese Bush Warblers, Dark-sided Flycatchers and Stejneger's Steonechats.
At Hado, the reservoir was filling in with growing numbers of winter ducks - several hundred Pochard, Gadwall, and Eurasian Wigeon. Handfuls of Eastern Spot-billed Ducks, Moorhens, and Coots were also present, along with two Ospreys and a Common Kestrel.
At Pyeoson, 24 Kentish Plovers and several Dunlins paced the beach. Back in Seogwipo, a Taiga Flycatcher remains in a park, associating with an Asian Brown Flycatcher, as the Red-breasted Flycatcher seen there (on almost the same day) last year did.


Seogwipo, Jeju island, October 14, 2010
Great fall weather for birding on Jeju, with a few migrants and regulars in evidence. In a quiet park, a female Taiga Flycatcher flicked its tail from a low perch, in the same spot where a female Taiga Flycatcher was spotted last year, almost to the day. Perhaps the same bird? Also in this park: several Grey-streaked and Asian Brown Flycatcher, an increasing number of Eastern Spot-billed Duck (20), several Mandarin Ducks, and a White-backed Woodpecker.
In a farmer's field, two lugens White Wagtail cavorted in the dirt, chasing grasshoppers, while a Grey Wagtail worked a nearby stream. A male Stejneger's Stonechat in non-breeding plumage, numerous Japanese White-eyes, and a Common Snipe were also present in this field. As I was leaving, a mystery starling flashed past, showing a lot of grey. I didn't get a good look at it, but it gave me the impression of a White-Shouldered, which I've seen in this field before.

(*Note: This is a “historical post.” Whereas I started birding in Korea in 2005, this blog has only been active since early 2012 - these posts are an attempt to consolidate my early birdventures from the various blogs and websites where they reside, largely from the “Archived Bird News“ section of Birds Korea’s excellent website: http://www.birdskorea.org/Birds/Birdnews/BK-BN-Birdnews-archive.shtml. Find more historical posts by clicking on the "Historical posts" tab at the bottom of this post.
For this post, most of images are lamentably poor-resolution screensaves, as many of the original photo files were lost in the infamous computer crash of 2011.)
Posted by Matt Poll at 9:09 PM No comments: