I have been on Geoje-do for almost a month now, and I've yet to see a Blue Rock Thrush. This strikes me as odd, as this island seems to possess a solid array of suitable coastal habitat. On Jeju-do, I saw these active and outgoing birds perched very regularly year round, even in parks and in the city, and once hunting in the indoor parking garage at a Home Plus (a large department store)!
I'm getting a motorcycle soon, so hopefully I'll find where these guys are hiding on Geoje as my range expands.
Posted by Matt Poll at 3:17 AM No comments:


Here are a few pics of some of the other birds we met along the way. The Barred Owl was exciting - it was in a park, and it looked sleepy and grumpy, like me. There were plenty of owl-snack-sized squirrels nearby, all fat, happy, and delicious. Not that I tried one, I'm just saying.
Posted by Matt Poll at 8:33 AM No comments:

The face-freezing quest for the Townsend's Solitaire - Montreal, December 4, 2011 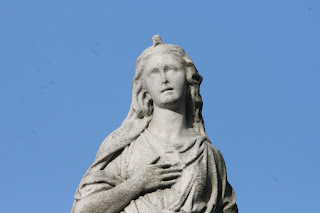 It was an entertaining twitch for a super-rare bird that far east - here were my thoughts at the time:

I spent the last two days in a cemetery, with Dan, a person I first birded with decades ago. We were looking for a small grey bird, the evocatively named Townsend’s Solitaire. They usually hang around the Rockies, but this one was hopelessly lost. We spent Saturday morning and afternoon wandering among the tombstones along with a dozen other twitchers, with no luck.
Today we returned even earlier. I hate mornings. So we drifted aimlessly among the dead, again, in face-freezing weather. We split up to cover more ground, and I ended up zoning out and reading tombstones up in the hills, having completely forgotten about birds.
Suddenly my phone rang, and it was a gracious local birder named Gilles, who I had absent-mindedly given my phone number to earlier. He found the Solitaire. I sprinted down the hill and got profoundly lost, but I eventually hooked back up with Dan, and we soon found a flock of birders gawking up at a tree. The Solitaire was singing away in relatively plain sight, and then it came down and posed for us. Good twitch.
Looking at the pics, it looks almost exactly like an Asian Brown Flycatcher from the shoulders up. Shoulders?
Posted by Matt Poll at 8:22 AM No comments:

The weather for the first couple of weeks in January was unseasonably warm - up to 12° C (53°F) during the day. Here are a few of the birds I ran into on these sunny days. Daurian Redstarts have a habit of leading me down the trail like an impatient spirit guide, creaking their squeaky hinge creak.
There is a salt-water canal right outside my window, and one of the first things I do every morning is scan the rafts of gulls and ducks for anything interesting.
Posted by Matt Poll at 9:22 AM No comments:

This bird is among the smallest in Korea - just a ping-pong ball-sized fluffball! They rustle through the underbrush on hillsides and reedy ditches in groups of 10-30 like a pack of mice, and they don't sit still very long to pose for pictures. They're pretty common in rural areas all over Korea's mainland (plenty in the hills of Geoje!), but I never encountered any on Jeju.
Posted by Matt Poll at 8:05 PM No comments: 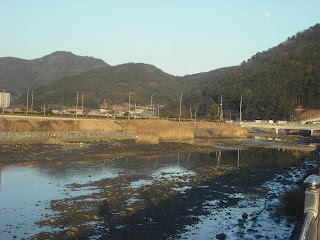 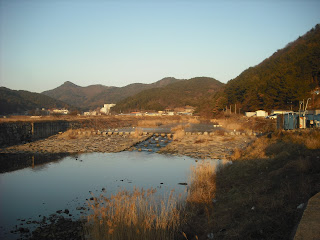 I knew my new home on Geoje Island (island is 'do' in Korea, so I live on Geoje-do) was going to be a promising spot for birds when I spotted a Black Kite on the car ride back from Gimhae airport! That's a Korea first for me, by the way. I'm living in Gohyeon which is nestled in coastal valley that boasts a fairly wide range of suitable bird habitat.

Jet-lagged, I woke at 5 a.m. and walked up a mountain, more of a hill, to watch the sun come up. Seems that's a Korean thing to do. Actually, a non-Korean friend of mine once climbed up the tallest mountain in South Korea at night, naked. He went on about how the dawn wind flowed past his genitals like they were wind chimes. Hippies. So the birds. I was sat up at the top, and a bird wave came and checked me out for a while. Lots of tits. Then a Roe Deer came whipping past me at a distance of about three feet, followed closely by a formidable-looking dog. The dog stopped 50 feet beyond me and looked around, having smelled me I guess. I didn't move an inch, and the dog kept on after the deer. Time to start packing dog treats in my camera bag I see!
Overall I was impressed by my new patch, as I passed by a harbour, a salt-water canal, fresh-water streams, low mountains, fallow farm fields, marshy wetlands, and massive reedbeds.

I spotted 42 species on this walk, including a number of mainland species that were notably infrequent or absent from my Jeju birding trips, such as Long-tailed Tit, Varied Tit, Coal Tit, Japanese Pygmy Woodpecker, and Vinous-throated Parrotbill - most part of a vigorous and inquisitive bird wave that enveloped me as I ate breakfast on that mountaintop. In the hills, I also saw a Japanese White-eye, numerous Yellow-throated Buntings, as well as a Dusky Thrush and a Pale Thrush. The harbour and streams are home to many hundreds of Spot-billed Ducks, as well as groups of 20-50 Eurasian Teal, Gadwall, Mallard, Eurasian Wigeon, Common Pochard, Common Goldeneye, and Great Crested Grebe. I spotted a Black-headed Gull in the harbour with the more common gulls, while a lone Cinereous Vulture soared overhead. At a quiet spot on a rocky stream, I was pleased to find five Long-billed Plovers.