On Saturday, my good birding bud Tim and I made our separate ways to Gangneung, a small city on Korea's northeast coast. We were there to find a Canvasback, a duck that, in spite of sketchy previous reports, has most likely never been seen in Korea before.
The birding gods were not smiling on us on this day, however, as constricting transportation logistics and unprecedented blizzard conditions conspired against us. We ended up with only a few hours to scan a lake (that looked a whole lot smaller on the map!) for a Pochard...that wasn't a Pochard. When we got to the far bank, the raft of Pochards seemed to be frustratingly close to the opposite bank. This happened a few times, and I'm wondering if it was a perverse illusion, or if the ducks were actually screwing with us. Long story short, we didn't see the Canvasback, but it sure was an 'adventure.'

Email ThisBlogThis!Share to TwitterShare to FacebookShare to Pinterest
Labels: Korea-Gangneung

Still pretty quiet on Geoje. I have been talking to some other birders, and we all agree it's been a slow and strange winter on the bird front. Almost no thrushes, and no finches so far. There are big plans afoot to head up the east coast this weekend to twitch a Canvasback on Saturday, and take a boat trip on Sunday to check for juicy pelagics. Wicked.
Up in the hills, I've had a male Red-flanked Bluetail leading me up the trail lately, which is notable in that I usually only see the drab females. Yesterday I saw about 30 Grey Herons circling over a wet reedy area. Since mid-January, I've been seeing nice flocks of 20-50 Olive-backed Pipits in a wide range of habitats, like farm fields, wooded mountains, and coastal brush.
Posted by Matt Poll at 7:17 AM 2 comments:


I came across some interesting snakes on Jeju while birding, but unfortunately I found most of them dead or dying on the road. I'm eager to see what scaled critters are about on my new island! I'm no reptile expert, so I've identified these reptiles based on whatever (sometimes sketchy) information I could glean from the internet. Snakewatching!
The Black-headed Snake is interesting in that it was only first discovered in Korea (on Jeju!) in 1981. Too bad I found it right after it had been hit by a car. I believe it bit itself as it was dying.
The Ussuri Mamushi Pitviper is a deadly little viper that I almost stepped on once or twice while birding! Apparently the Japanese call it the 'Three-step Snake', due to its potent venom. My Korean birding friend Young Ho told me that, in spite of this venom, it doesn't inflict many fatal wounds on people because its fangs are further back in its relatively small mouth. A gorgeous animal.
Posted by Matt Poll at 1:43 AM 2 comments: 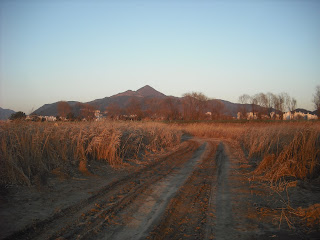 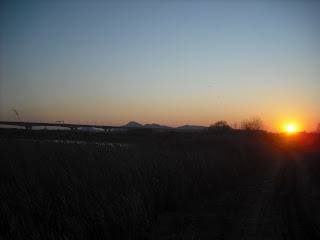 On Sunday I had the fortune of meeting and birding with JP, a fellow foreign birder based near Busan. We spent the morning at Igidae, a coastal hilltop within sight of bustling modern Busan. Criss-crossed by busy hiking trails and disturbing degradation, there were nevertheless some quiet spots there with some interesting birds. The highlights for me were some slow passes by a pair of Black-eared Kites, and a Eurasian Kestrel hovering overhead for nearly 10 minutes.
In the afternoon we headed to Eulsuk-do, a reedy island just west of Busan proper. We spent many hours there hiding from dump trucks (we may have been a bit out-of-bounds), observing Whooper Swans, huge flocks of Mallards, and a few dozen Black-headed Gulls. The bird we were really after, the Common Reed Bunting, made a late but welcome appearance just as the sun was headed down.
On the mammal front, Amur Leopard Cats, Raccoon Dogs, and Water Deer live on Eulsuk, but sadly I only got a fleeting glimpse of a Water Deer at dusk.
Posted by Matt Poll at 8:29 PM No comments:

So I finally got my sweet ride! Once I teach myself how to stop stalling at intersections, I'll be conducting a thorough recon of the whole island. I've spotted a lot of potentially interesting spots on Google Earth - reservoirs, rocky peninsulas, quiet harbours, and extensive farm fields - I wonder if they still exist? Also, while hiking the tallest mountain on Geoje, Geyrong-san ('san' is mountain in Korean), the other day, I saw what looked like a huge patch of coastal reedbed through the binos. Looks promising.
As for this weekend, the plan is to check out a couple of good coastal birding spots around Busan.
Posted by Matt Poll at 6:26 AM No comments:

A rare visitor to Jeju, the Oriental Stork is an endangered Eastern Asian endemic. There are no recent breeding records for Korea, and only a few dozen individuals are recorded annually. This individual attracted the attention of the local media. My amazing birding buddy Youngho took me out to see this massive and serene bird one hazy morning, and my pulse was racing the whole time. It dwarfed a nearby Grey Heron, which is usually the largest species around.
Here on Geoje, the ducks of winter remain in solid numbers on the local rivers and harbours, while species like Yellow-throated Bunting, a variety of tits, and Vinous-throated Parrotbills are still plentiful in the hills. Thrush numbers seem low this winter, with only single examples of Dusky, Pale, and Scaly Thrush seen lately. I've spotted an increasing number of Black-headed Gulls amongst the more common larger gulls, with about a dozen seen in the harbour recently.
I just purchased a motorcycle, so the promising and quiet peninsulas on the south side of the island will open up to me very shortly!
Posted by Matt Poll at 6:18 AM No comments:

I count myself lucky for having seen this bird for several reasons. Firstly - look at it, it's a spectacular bird! This is the female, the male is similar, with chestnut/maroon scapulars. The second reason is that it wasn't really supposed to be there. Depending on who you ask, the species is either accidental, or a scarce migrant to South Korea, with less than 10 records a year here. Less than five is probably more accurate.
The story of this particular bird is a fairly romantic one, or at least it is when I tell it (hopefully I've got my facts straight). This female was thought to have been blown onto Jeju Island by a weather system a few years back, and ended up in the Halla Arboretum on the island's northern side. Scattered throughout the arboretum are trees with hard green berries that are favoured by the White-bellied Green Pigeon, but are by no means common in Korea. The female stayed in the arboretum all summer, and presumably returned to southern China in the fall. The next spring, local birders were surprised and pleased to find that the same bird had returned to the arboretum again, perhaps confused by the presence of its favourite tree. Sadly, it was waiting for a mate that would never arrive, as a male has never been seen in the arboretum.
Hearing of this tragic unrequited love story in 2009, I spent more days than I'd like to admit stumbling through the arboretum, neck craned upwards, looking for a relatively immobile green bird in an ocean of green trees. Another reason I'm lucky to have finally seen it, I suppose. That year I didn't see the White-bellied Green Pigeon, but I must have hallucinated it a few dozen times in the course of my fruitless wanderings.
In the spring of 2010, I went back on Green Pigeon patrol, and spent a few more days moping listlessly through the arboretum, my birding spirits waning dramatically. Then, one fine Saturday, I woke up knowing I would see the vaunted bird. I again took the long and winding hour-long bus ride over the mountain from south to north, and headed to the arboretum. Within five minutes, I was standing directly under a pigeon in a tree. 'Oh great, another Oriental Turtle Dove playing cruel games with me,' I thought. I looked closer. It was green. I believe my hands started shaking (twitching, actually), and my brain shut down. I stared at it blankly for about a minute with a simple grin on my face before I remembered the binoculars and camera that hung around my neck. Definitely one of my top five birding moments!
This female didn't return to the arboretum in 2011, and I'd like to think it's because it ran into a handsome male Green Pigeon somewhere, and not a handsome Peregrine...
Posted by Matt Poll at 6:24 AM 1 comment:

Hard to think of a better name for such a gorgeous bird. They do kind of swagger like they know it, too! Their Korean name, 'Hwanggeumsae' translates to 'Yellow-gold bird'. Aptly named again.
For a few magic weeks in late April to early May, I used to spot these unmistakable glowing birds at several choice locations in my patch on Jeju Island. One of them was a quiet riverside park, where several males (never the drab olive females) could always be found loitering in the trees over the river. The Narcissus winters down in Borneo, and breeds in Japan, only passing through Korea's southeast briefly. Here's hoping we get some here on Geoje this spring!
Posted by Matt Poll at 7:31 AM 2 comments: