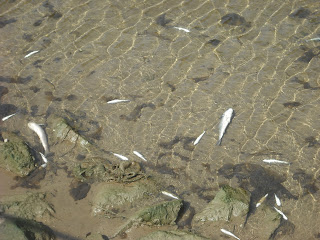 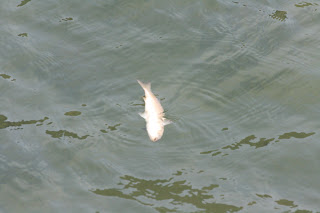 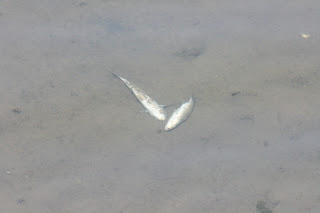 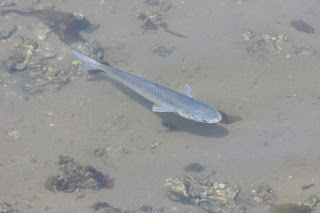 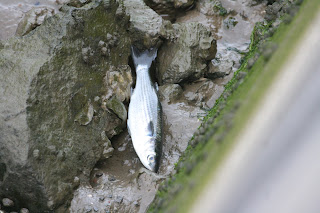 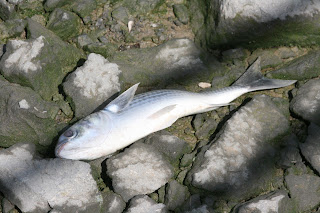 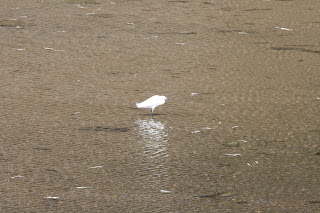 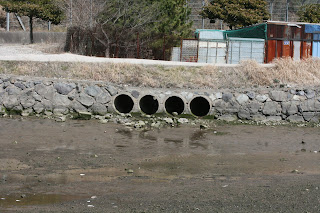 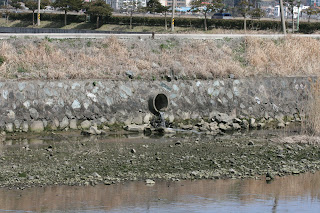 Early last week I spotted Black-tailed Gulls fighting over some dead fish in the salt-water canal next to my apartment. A few days later I walked along the canal and spotted several hundred more dead fish, which the gulls were now leaving alone, probably wisely. Over the weekend, I was appalled to see thousands of dead and dying fish in the canal.
The canal is bordered by farm fields, and the farmers have been covering the fields in fertilizer and pesticides lately. I'm guessing the runoff from the fields, which drains directly into the canal, is what's killing off the fish. Koreans were looking at me like I was strange for taking pictures of the dead fish. I, in turn, thought they were strange for not being alarmed at the thousands of dead fish.
Posted by Matt Poll at 7:38 AM No comments:

Thankfully pronounced 'who-poo', the Hoopoe is the ultimate punk-rock bird. These D-Day stripe-winged birds show up in farming towns in small numbers every spring and fall in Korea, but have a habit of turning up at random times year-round. One was just spotted on Jeju a week ago. 'Hututi' in Korean, by the way.
Also spotted on Jeju over the past week: 10 Oriental Plovers! My Korean birding friend Young Ho and I spent three consecutive springs fruitlessly searching for one on Jeju, so naturally 10 show up my first spring away.
I was going to cruise down to the southeast of the island to have a look for any early migrants today, but it's looking rainy. A lot of Little Egrets on the salt-water canal outside my apartment lately - at least 30.
Posted by Matt Poll at 9:34 PM No comments:

It looks like I missed another epic birding trip due to a prior commitment this past weekend. I only missed out on a spectacular Siberian Crane and hundreds of thousands of Baikal Teal at Saemangeum, on Korea's west coast. Ouch. Ah well, at least that leaves me with some great stuff to see next time!
I went birding here on Geoje yesterday, and things are still extremely quiet, with no sign of spring migrants yet, and the gulls and ducks of winter still present in force. I did get quite a bit of habitat recon done though, so hopefully I'll have found a good selection of key birding spots by the time spring hits.
In lieu of any real recent bird news from Korea, here's a little Montreal twitch from back in November - interesting to contrast the birding scenes in Canada (get in line!) and Korea (go out and find something new and awesome!). Here's what I wrote at the time:

Dan and I headed out east to search for some rare birds that were recently spotted in a reservoir there. A European Greylag Goose, clearly lost or attention-starved, was bringing in twitchy birders from all around Canada and America to the Chambly Basin for the better part of a week, but it was nowhere to be found today. We did spot a distant Great Cormorant (my old friend from Korea), uncommon this far inland.
The real money bird was the Fulvous Whistling Duck, extremely rare this far north. We found it northeast of Chambly, in Otterburn Park. Here’s where it got surreal. We trudged into a frozen swamp to get a better view, and spotted it on a log, its head down, napping. I was staring through the viewfinder of The Beast for about 15 minutes, waiting for it raise its selfish beak, arms quivering. A rumbling train got its little fulvous head to pop up for a couple of seconds, and I got the picture. When I looked around, I was fairly shocked to find that we were no longer alone in the swamp. We were surrounded by a phalanx of about 15 birders crouched behind an imposing array of optics and fancy shoulder harnesses. What the? I kind of wondered why they didn’t have anything better to do on a Tuesday afternoon, but then I realized that they were me, sort of. That kind of bird paparazzi crew feels strange to me – I pretty much had an entire sub-tropical Korean island to myself for 2.5 years, scooting around on old-school Tintin birdventures, all fancy-free and alone.
After we got a good look, we headed back to the parking lot, and as soon as we got there, the noisy mob flushed the Fulvous and Mallards it was rolling with, and they flew a few hundred feet over, right in front of where we were standing. Click. We watched the birder crew shoulder their tripods and slog back towards us, and The Duck. Wacky. Oh, we saw a Bald Eagle, and I kept calling it a ‘Wild Eagle, American Eagle, 100%’, in a manic Sopranos voice. I guess were tired, because we found this way too funny, and we laughed like foolish ninnies.
Posted by Matt Poll at 6:18 AM 2 comments:

Yesterday I took a drive up to Geoje's northwest coast to see if anything interesting was about. I was more than a bit surprised to spot almost a dozen Cinereous Vultures circling over a small village - they're not seen very often this far south. Later in the day, I was at the top of a small mountain with a friend when a group of vultures (probably the same group from earlier), whipped past the peak about 20 feet over our heads. An awesome sight - they've got three-metre wingspans after all!
Posted by Matt Poll at 7:37 AM 2 comments:

After some more predictable Korean logistical snags, Tim and I ended up in in Pohang (an hour north of Busan on Korea's southeast coast) at 2am, with a 5:30am start planned for Sunday.
I'm not a morning person. I shook it off, and it was a great pleasure to finally meet Dr. Nial Moores, the director of Birds Korea, and most definitely the most knowledgeable birder I've ever met. There were six other birders on the trip (seven birders from six different countries!), and Dr. Moores conducted several in-the-field birding clinics for us, helping us decipher tricky gulls and pelagic species. I am happy to say he helped me push through a lot of the hesitation I typically encounter when trying to ID gulls - they used to make me miserable!
We spent the day on the Gureyong-po peninsula, and things started off well when we spotted 300+ Russet Sparrows - the largest flock ever recorded in Korea, and a long sought-after lifer for me. Highlights from our extensive seawatching included massive rafts of Ancient Murrelets, and great views of male Harlequin Ducks and Rhinoceros Auklets. Dr. Moores also picked out a Caspian Gull on a beach, a species previously recorded only a handful of times in Korea.
All told, it was an exhausting but extremely rewarding birding weekend, and I will remember the giddy car rides well. It is sobering to think that the six non-Korean birders that assembled on this trip represented most of the foreign birders in the whole of South Korea. It reinforces my feeling that there are plenty of interesting birds to be found in Korea, but almost no one is looking for them.
Posted by Matt Poll at 7:20 AM No comments: