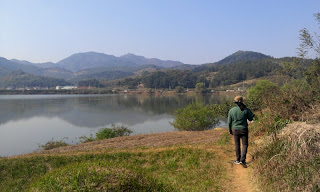 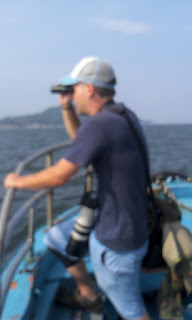 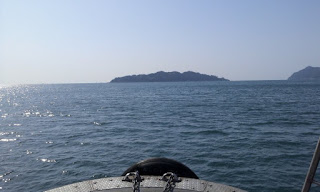 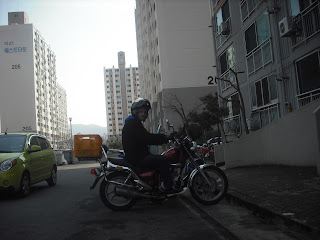 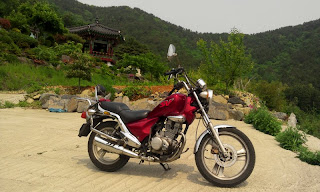 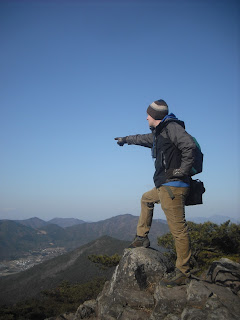 Y'know what I miss the most about Korea? Hopping on a 1996 Daelim VS (a 300$ bike that looks like it cost at least...twice that much) with my binos and camera and heading off to unknown and unbirded patches of wilderness in the hopes of finding suitable bird habitat and interesting birds.
In Korea, suitable bird habitat is disappearing at a disgusting rate, so maybe I should head back soon and see what there is to see before it's gone. And maybe this time round I could do more to helpfully contribute to documenting and conserving Korea's unique bird life in whatever way I can. Hey, let's make that a resolution.
Vroom! Chirp!
Posted by Matt Poll at 1:45 PM No comments:

I went for a Westmount walkabout today, and I saw nothing, and it was rainy. One thing I noticed was that, still hungover from Korea, I had to remind myself to not be excited about seeing Common Starlings, which are exceedingly rare there.
I miss swashbuckle motorcycle-birding in Korea.
Oh, I dusted off some more mouldy oldie sunny Mtl birdy mems. These are from the Westmount Summit, mid-August 2011.
If I'm reduced to dusting off birding memories, I should put up some stuff from my epic Australian trip from wayyyy back in 2008. Should I?
Posted by Matt Poll at 1:39 PM No comments: 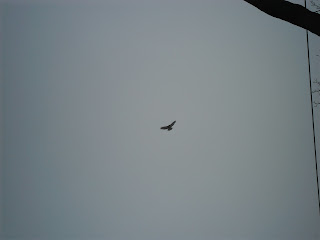 I spotted this guy circling low and hard over NDG, a typically tree-rich area of Montreal. I got a snapshot of it with a small digital camera, but it was low enough that you can make it out. The squirrels I saw further on down the street looked worried, and rightly so. Reminded me a lot of the Buteo buzzards I ran into in Korea, only squatter.
Dan and I are headed out for a bird wander on Thursday, at some spots to be determined. We'll probably just make it up as we go.
I keep daydreaming about spending a couple of months of solid birding on Korea's Yellow Sea islands in April-May. Just go there unemployed and bird from dawn til dusk every day. Hmmmm.
Sounds like the start of a solid Plan B, because lord knows my Plan A is not looking too good.
Posted by Matt Poll at 11:12 PM No comments: 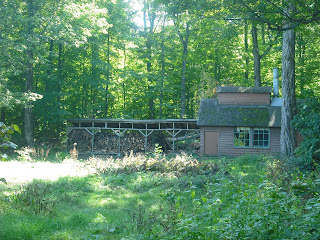 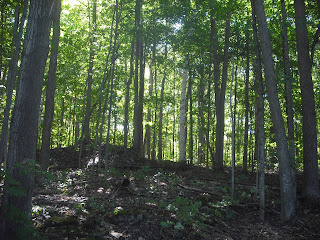 Because it is so hellishly cold, here are some nice warm memories of an Arbo trip that now seems like a long time ago. That balmy day saw a fun mix of birds, reptiles, amphibians, and mammals.
Posted by Matt Poll at 1:37 PM No comments: 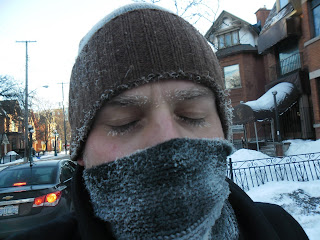 Email ThisBlogThis!Share to TwitterShare to FacebookShare to Pinterest
Labels: Canada-Ontario

Here are Dan and I at the arbo trying to feed Chickadees. One pic was taken today, the other was...not.
Posted by Matt Poll at 5:35 PM No comments: 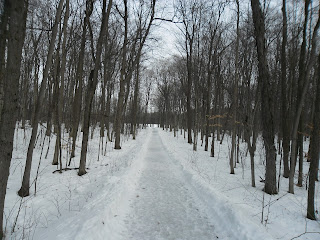 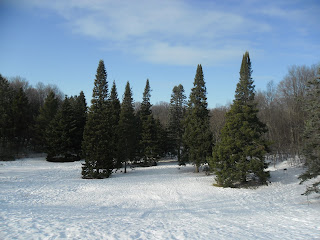 It was a mild and sunny January day on my first Montreal birding expedition in over a year. Upon arrival at the Morgan Arboretum (at the northwestern tip of the island of Montreal), Dan and I were surprised to see a flock of Common Redpoll actively feeding in the sunlight. This winter has seen an influx of Redpolls in Quebec. I believe this was a first for me! Great-looking bird.
This winter has also seen a spike in the sightings of our other two ‘interesting’ species of the day – Red-bellied Woodpecker, and Great Gray Owl (!). The Red-bellied Woodpecker stuck to the high treetops, and was apparently not very aptly named. Also of note was a leg-banded White-breasted Nuthatch. I’ll try to decipher the markings on the band and pass the info along to the banders, most likely the McGill Bird Observatory (http://www.migrationresearch.org/mbo.html).
Dan, my birding compadre for at least 25 years, almost rugby tackled me as we were walking down a narrow trail between two large fields, and hissed ‘OWL!’ in my ear. There was a Great Gray Owl perched casually above our heads. It just sat there scanning the fields, lazily swivelling its alien-turret head around to sternly glare at us every few minutes. Good times! The next week will see an end to this unseasonably warm weather, as an arctic cold front moves down to turn runny noses into ice. Here’s what we saw:

The winds of migration...

...shall very soon sweep this Snowy Owl back to the frozen wastes of Quebec. I took time out from being exhausted and stressed and went out for my first (last?) Korean bird walk of 2013. Definitely bittersweet, much as my year has been. I got good long looks at a group of Pallas's Reed Buntings perched in a small tree. Strange, as usually they're seen flitting nervously through reeds. These guys were just sitting there watching me watch them watch me. I took it as a sign of some kind. Hopefully this great little strip of habitat will still be here in a year. Already flanked on two sides by canyons of apartments, the worker ants were busy today ripping up more and more reedy habitat to put yet more apartments in. Sigh. Ok, time to get back to being exhausted and stressed.
Posted by Matt Poll at 8:30 AM 2 comments:

I had the pleasure of spending the last day of 2012 with Dr. Moores, a remarkably intelligent birder/conservationist, and all-around good bloke. We scoured Igidae at a leisurely pace, and while we didn't run into anything super rare, we had a great day getting to know a lot of the more common birds a bit better. It started to get frigid by day's end, and indeed, a large system of cold weather is pushing through Korea over the next week. We'll see if any birds come down with the system...
Posted by Matt Poll at 6:53 AM No comments: