Loghry came up last weekend on short notice, so we birded the heck out of Saturday. We hit Suncheon Bay hard in the morning, then impulsively decided to head an hour north to Cheonansa Temple - the only reliable place in South Korea to see the elusive Hill Pigeon. We both had never seen one yet, with Loghry having dipped at Cheonansa before.
The temple was in a peaceful little spot perched in a quiet valley, echoing with the sounds of typical forest birds for this time of year. We wandered around for about 10 minutes before we both froze at the sight of a grey blob perched under the eaves of a temple building. Hill Pig! Yeah, I call Hill Pigeons 'Hill Pigs' now, in an attempt to be cool. When I see a Tree Sparrow, I just make a quick 'Trssp!' sound, because I don't want to be seen to make the effort to say the bird's actual name.
Back to the Hill Pigs. Yes, I know they may look very much like your average everyday city-type crumb-eating pigeons, but I assure they are so much more. We saw only three on the day, and the maximum seen at that site is perhaps 18. Which is 18 more Hill Pigeons than you're likely to ever see in Korea. I believe they used to be much more widespread, but, like many species in this country, are having a hard time dealing with the voracious development that is steadily chewing up and shitting out the remaining wild and natural parts of Korea. See all the birds now before they're gone. Quick quick!
A serene bird, the Hill Pigeons seemed to watch us back, sizing us up. The white subterminal band on the tail is the giveaway, but after having stared at the field guides for years I was unprepared for the overall crisp elegance of the bird in the field. From the gentle gradient of the maroon breast markings, to the clean metallic grey basecoat, the bird stands out. Hill Pig!
Posted by Matt Poll at 2:55 AM No comments:

Here are a few more bird images taken in Suncheon over the past few weeks. Jason Loghry was in town over the weekend, and we had an interesting day out on Saturday - more on that soon.
Posted by Matt Poll at 3:29 AM No comments:

Email ThisBlogThis!Share to TwitterShare to FacebookShare to Pinterest
Labels: Korea-Suncheon

My first trip to Suncheon Bay was in the chilly early morning gloom of February 16th, with several visiting English birders. We initially spent a couple of hours in the quiet reedy area towards the north, and buntings were well-represented, with Rustic, Yellow-throated, Black-faced, Little, and Pallas’s Reed Buntings. Small numbers of Chinese Grosbeaks, Olive-backed Pipits, and Dusky Thrush were working the trees and lawns in the more park-like sections. Also seen were small groups of Bean and Greater White-fronted Geese, White Wagtails, and several Eurasian Spoonbills. At least 800 Hooded Cranes awed and impressed with several mass flybys. There was a large, lightly-coloured hybrid of the two species mixed in. Black-headed and Saunders’ Gulls were both seen floating around the mudflats, while a Western Osprey and Hen Harrier scanned for prey a bit further out.

On the 20th I returned to Suncheon Bay, but avoided the raucous holiday throng in the paid area and walked along the quiet river trail back towards town. The mix of birds was similar to the 16th, with the addition of 11 Cinereous Vultures, and an inquisitive band of Chinese Penduline Tits.
Thankfully it was quieter, people-wise, when I returned to the bay on the 27th with Helly, focusing this time on checking a forested hill for birds. Parts of the hill were dense with an assortment of birds, including roving groups of Vinous-throated Parrotbill and Long-tailed Tit, as well as a group of about 20 Japanese White-eyes, and a similarly-sized pack of noisy Eurasian Siskins. Also on the hill were smaller numbers of Coal, Great, and Varied Tit, and several confiding Japanese Pygmy Woodpeckers, while the scrubbier slopes were teeming with Yellow-throated and Rustic Buntings. The lookout at the top of the hill afforded us a view of ten Eurasian Spoonbills, and about 300 Hooded Cranes on the mudflats, with several suspected hybrids mixed in. Working the thermals overhead were a Northern Goshawk, four Cinereous Vultures, and two Eurasian Kestrels. ‘New’ the reedy area were seven Northern Lapwings and three Common Mergansers.
On February 28th I walked from Suncheon bus terminal to Suncheon Bay, via a path along the river. The first few kilometres were mostly birdless, thanks to the sterilized riverbanks – with the scrub and reeds cut down. Towards the Garden Expo, I encountered two birds that I wasn’t expecting to see for another couple of months – a lone Little Ringed Plover, and a Pacific Swift. The latter was wheeling endlessly over a small section of river, at times mobbed by a pair of White Wagtails. Heartening early signs of migration. Further down the river, as the vegetation improved on the riverbanks, the bird numbers and diversity spiked, with a good mix of expected winter birds in evidence. A Naumann’s Thrush perched in a small persimmon orchard near the bay was another unexpected highlight. On March 11th, I got to Suncheon Bay in the crisp dawn hours, and was rewarded with spectacular solitude for several hours, which is not a common situation at Korean tourist attractions! There were over 400 Hooded Cranes in the fields around the bay, with several hybrid birds mixed in. Highlights included a confiding Naumann’s Thrush, a much less confiding Chestnut-eared Bunting (one of seven bunting species seen), several Chinese Penduline Tits, and my first Japanese Bush Warbler of the year.
In the hills in and around Suncheon proper, the trees and scrub are alive with Long-tailed, Varied, Marsh, Coal, and Great Tits, Goldcrests, riotous mobs of Vinous-throated Parrotbills, infrequent Japanese White-eyes, Red-flanked Bluetails and Daurian Redstarts, with Pale and Dusky Thrushes lurking at the woodland edges. A hilly area near a small reservoir was buzzing with 140+ Eurasian Siskins on February 18th, while four rosacea Eurasian Bullfinch fed nearby.
At the base of Suncheon’s central mountain, it was a treat to watch a group of ten Azure-winged Magpies noisily work their way through a large grove of bamboo. A garbage-filled stream nearby perhaps surprisingly held a dozen Korean Crevice Salamanders writhing out from under rocks, amidst several large egg sacs. This lungless species was only discovered in 2005, by an American English teacher (*update: it seems they were in fact Jeju Salamanders). Small numbers of Japanese Pygmy, Great Spotted, and White-backed Woodpecker were busy feeding on different parts of the mountain.
It’s been a rewarding month of birding in Suncheon, with 88 species seen. However, in a place like Suncheon’s Lake Park, the scene is similar to what is happening all over this country. The banks of a stream have been made effectively sterile by the addition of big slabs of rock and the removal of most reeds and natural scrub, with heavy pedestrian traffic all around. While the 200m section of stream in the park is picked clean of trash regularly, the same stream is trash-choked for dozens of kilometres on either side of the park, with many locals dumping large appliances and heaps of general waste into the water. Very little bird life is in evidence in these locations, in spite of nearby ‘Eco-Geo’ posters depicting large flocks of wild birds flourishing.
Posted by Matt Poll at 8:59 PM No comments: 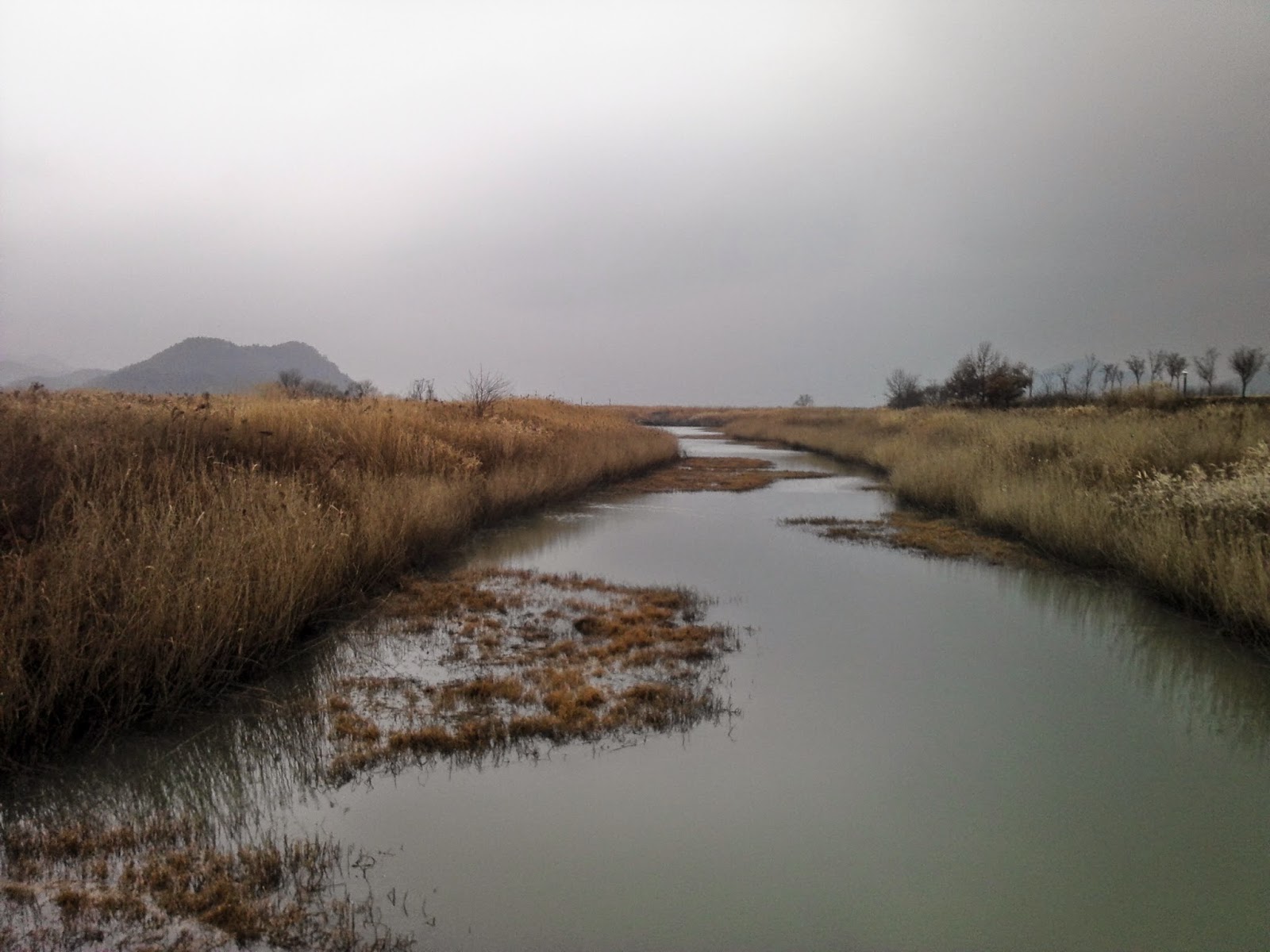 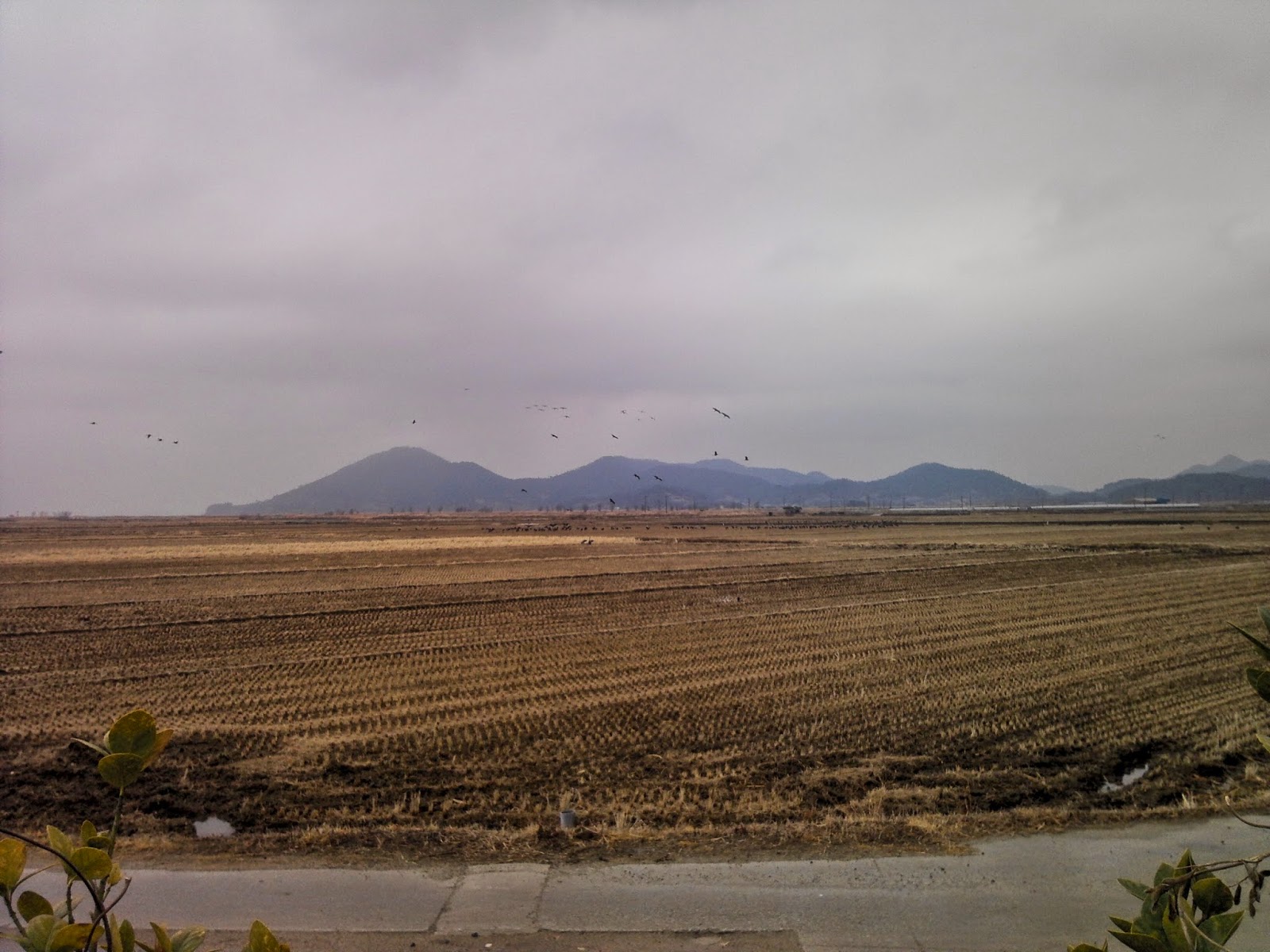 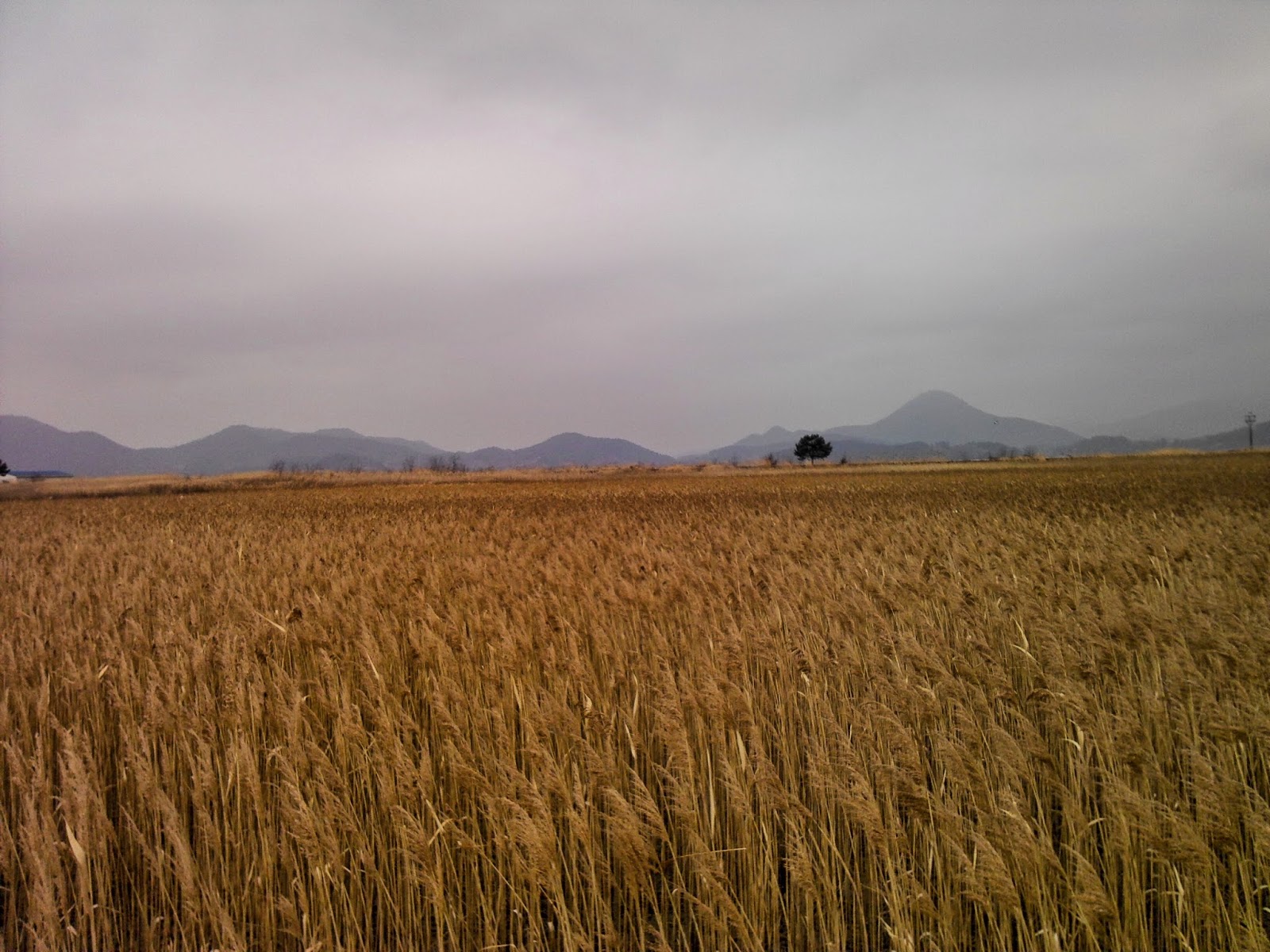 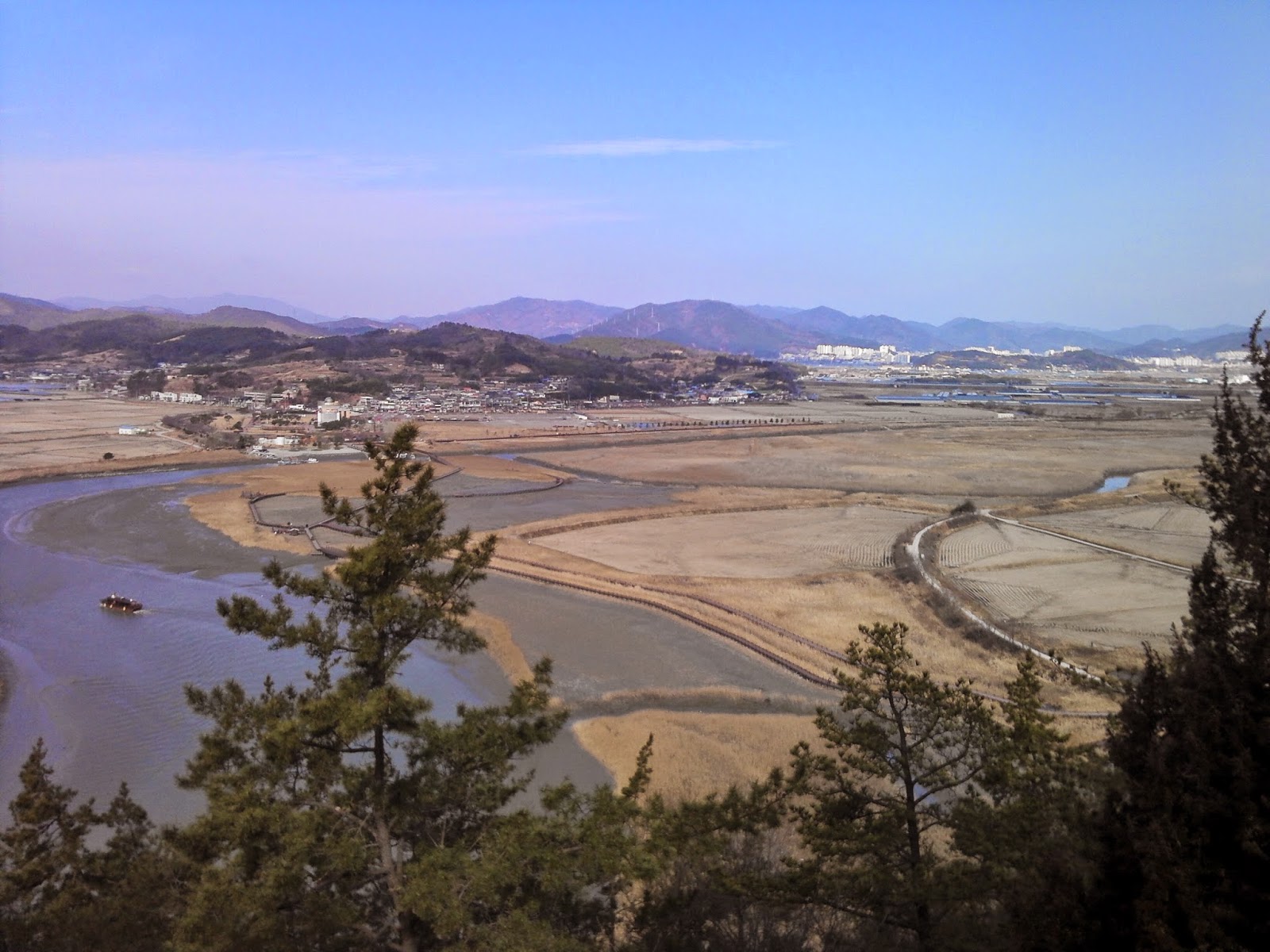 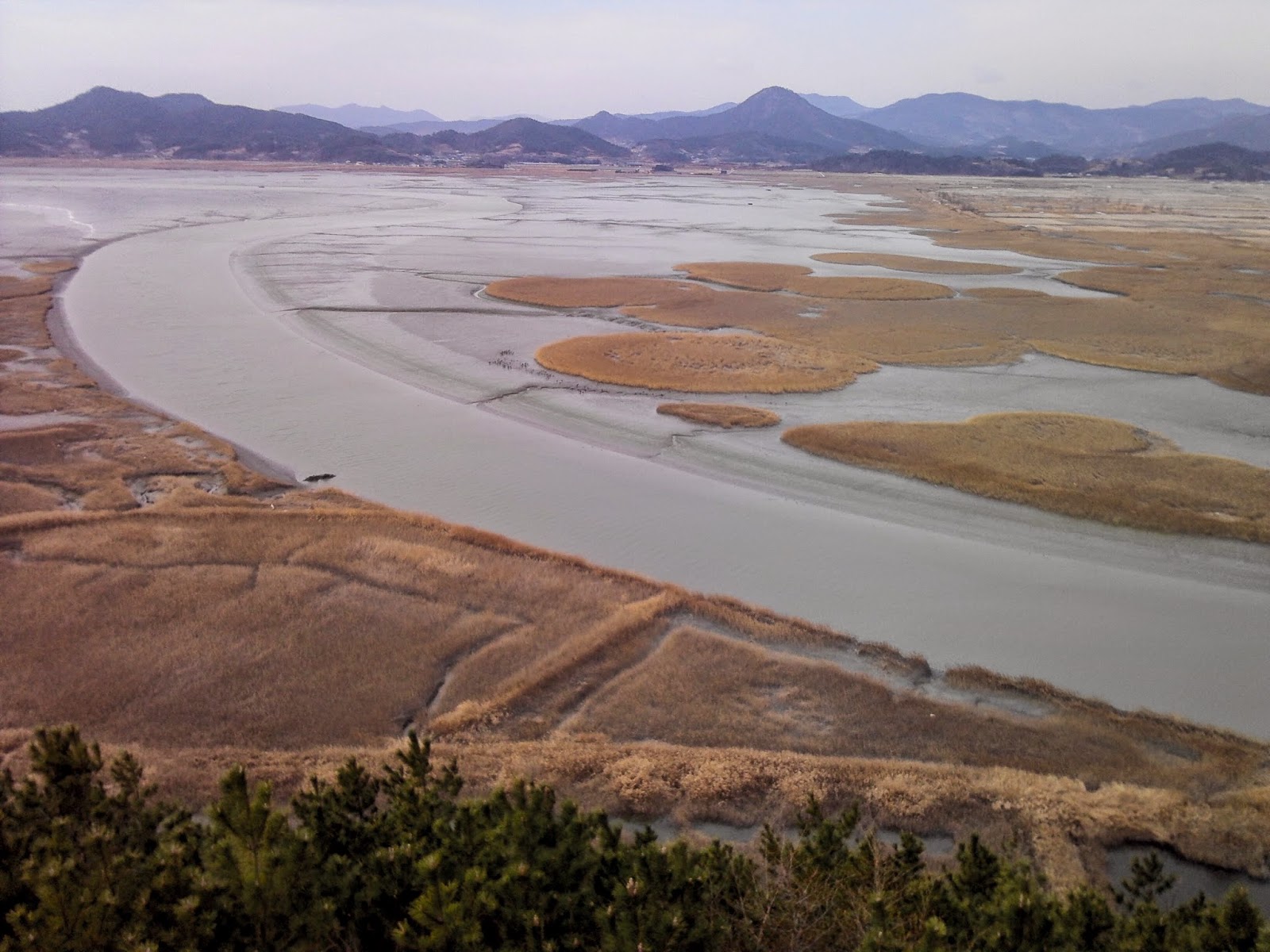 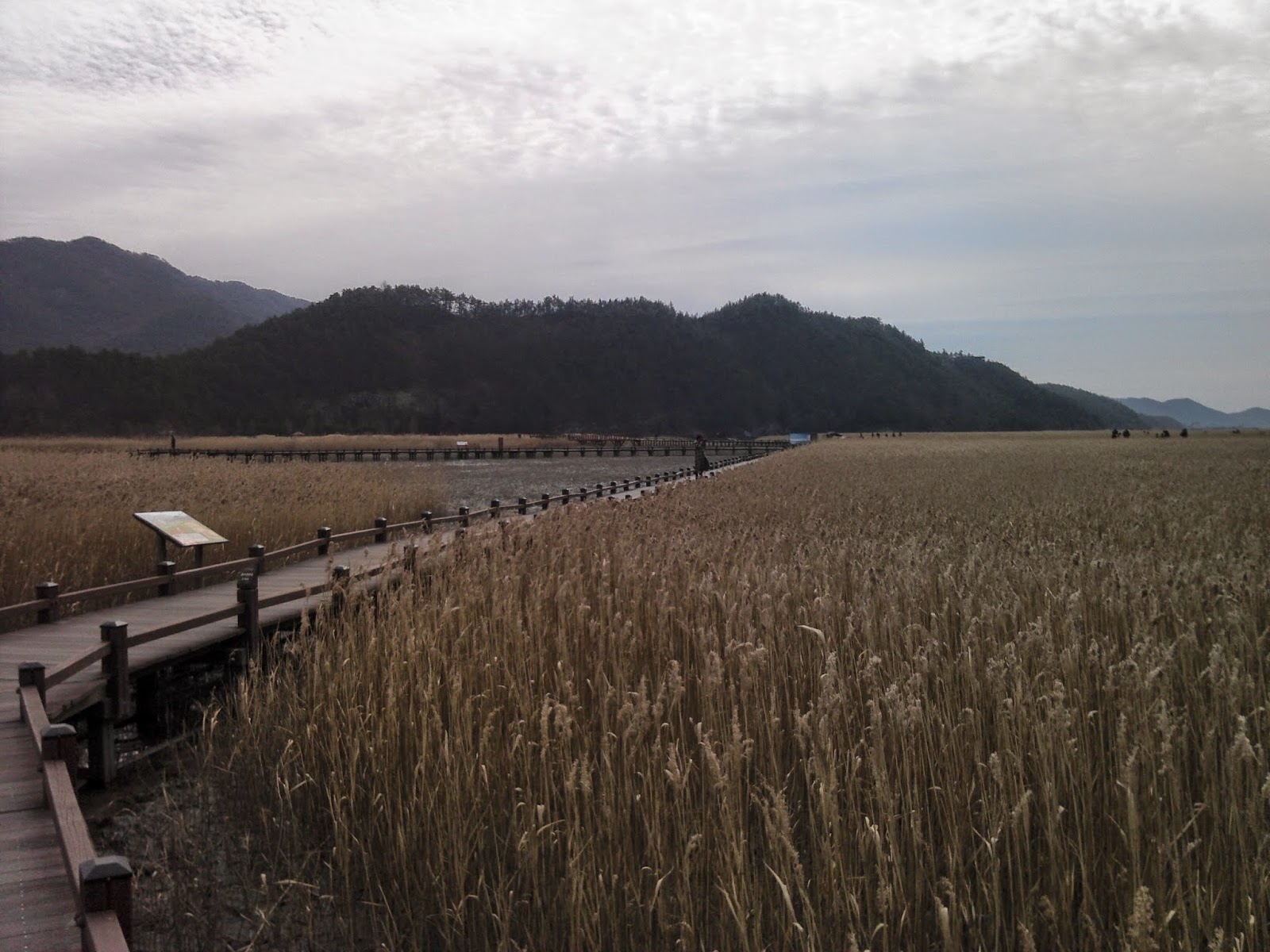 Good to be back, in some ways at least. I've been in Suncheon, South Korea for a few weeks, but it's always a bit hectic getting over jet-lag and settling into a new situation. I have been birding regularly, and there will be a big fat report up here in the very near future. Until then, here are some images of my lovely new patch (10 minutes from my door), Suncheon Bay.
I'm guessing this may be the only time I bird three continents in one winter.
Posted by Matt Poll at 5:45 AM No comments: