I did get out of bed, and went for a quick recon of a nearby NDG location. A fat-looking female Cooper's Hawk was a nice surprise, in pretty much the same spot where I spotted a noisy juvenile last August.
Posted by Matt Poll at 1:17 PM No comments:

Knowlton, March 23, 2017
Lucky to be on another jaunt out east, I set out with the intention of finding Evening Grosbeaks, which are spotted regularly at feeders around the lake. I didn't see one these spectacular finches (which I haven't seen since the age of eight), but did manage to spot some American Goldfinches with a Common Redpoll tagalong percolating through the treetops.
Looks like I've found a new white whale: Black-backed Woodpecker. Every birder has a white whale – that bird that persistently eludes you, and keeps pulling you back into the field with the siren-like allure of its maddening absence. Sometimes this bird can be a relatively common one, yet it consistently manages to keep one step ahead of you. It often feels as though the harder you search for this bird, the less likely you are to find it. Everyone needs a white whale of some kind. Something to get you out of bed when you need more sleep, something to daydream about when you’re in the midst of a long, miserable day at work.
We thought we heard a Black-backed Woodpecker from the tower at the Thunder Cape Bird Observatory in September, but no looks. Dan and I dipped on one by hours in Laval back in December. I could feel them watching me up in Foret Montmorency last month, and saw their characteristic flaked-off bark damage.
I saw more of this bark flaking in a quiet patch of mixed woods around Lake Brome on Thursday (Sibley notes "mature mixed deciduous forests" as suitable habitat), and there have been sightings of the rare species all around the area. As I was studying these flaked-up trees, I heard a woodpecker drum that sounded...off. Different from a Hairy Woodpecker, a touch less urgent. Of course, a two-hour stakeout produced nothing but frozen finger marrow, and a realization that I may never see this species. But it will get me out of bed.

For the flutterers that lurk among us.
Posted by Matt Poll at 8:29 PM No comments: 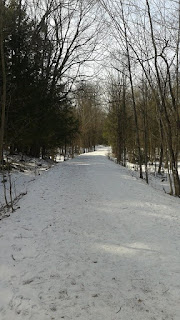 Just got back from a few days in Knowlton with a friend, which is relatively close to the Missisquoi spot in Vermont I visited in November. We ended up staying in a historic house from the 1870s called "Fairwinds". That was a trip. Didn't get a whole lot of birding in, but a couple of Red-breasted Nuthatch were a treat to watch. En route we had a few Red-tailed Hawks, healthy skeins of Canada Geese, and what I'm fairly sure was a cloud of 250+ Horned Larks in a field, put up by a low-flying helicopter.
Posted by Matt Poll at 8:45 AM No comments: