I spent an enjoyable 40 minutes watching a Black-billed Cuckoo in the drizzle today. Sitting in the grass amongst the pea-sized (but tasty) wild strawberries, I got great views as it caught and ate caterpillars for several minutes at a time before moving surreptitiously through the treetops to a new branch, superbly camouflaged. A very charismatic bird.
Still plenty of juvies out and about, and I came across what I’m calling a ‘nursery’. Juvenile birds of several passerine species (Red-eyed Vireo, Black-capped Chickadee, Indigo Bunting, and Chipping Sparrow) were flopping about and giving flying a try in a small patch of detached woods, under the supervision of vocal adult birds above.

I witnessed a similar scene in Suncheon in September of 2015: “On September 8th, a female Yellow-rumped Flycatcher was spotted in a small ‘nursery’ woods next to a reservoir near Suncheon. Young Black-naped Orioles, Brown-eared Bulbuls, Azure-winged and Eurasian Magpies tested their wings under the watchful eye of several perched adult birds nearby.”
Posted by Matt Poll at 6:24 PM No comments:

I went for a saunter through the Mount Royal Cemetery and environs on June 24th, to see what was kicking about. The Black-billed Cuckoos were still quietly haunting a forgotten corner (if you know where to look, heh heh - you gotta think like the biiird, mannnnnn), the bluebirds and butterflies were out, and young critters trying out new limbs rasped for mummy from every tree.
Posted by Matt Poll at 12:39 PM No comments:

While staying in the Cape, I was based in the sleepy cottage country of Craigville, on the south coast. There were loads of fledglings about – Common Grackles being fed next to a creek, young American Robins harassing adult birds, Red-winged Blackbirds (including one freshly fledged bird that appeared to have some kind of grotesque avian conjunctivitis), and a family of Tufted Titmouse (Titmice?).
I was jarred from slumber on two mornings by a rousing dawn chorus – first in was the song of an American Robin (at 4:15 on the nose), followed closely by the sounds of Mourning Dove, Eastern Phoebe, Red-eyed Vireo, Gray Catbird, Yellow Warbler, Baltimore Oriole, Northern Cardinal, Song Sparrow, Chipping Sparrow, several brief White-throated Sparrow phrases, House Finch, and American Goldfinch. A lovely racket, I wasn’t complaining.
I checked in on the swampy (and tick-infested) area where the Herring River empties into Craigville Beach several times. An Eastern Box Turtle was a pleasant surprise there, as was a flyby by a pair of Mute Swans. Gray Catbirds were thick on the ground, and four local Ospreys patrolled over the swampy bits, regularly putting up several jumpy Willets. Other Craigville observations included a Green Heron, Ruby-throated Hummingbird, and Northern Mockingbird.
Hyannis was passed through a few times, and it was there that I got my first looks at Laughing Gulls, Fish Crows, and Horseshoe Crabs. While driving through Hyannis, we passed a reedy pond where I saw/heard several fluttery Black Terns. Is that an odd record this time of year on the Cape? Who knows.
Posted by Matt Poll at 10:39 AM No comments:

While on the road, a dart was thrown at a map, and it hit Bass Hole (Bass Hole!), so that ended up being the first birding stop on June 20. A pair of nesting Ospreys, an American Oystercatcher, and several noisy Willets were viewed from a long boardwalk. Being the eternal scopeless wonder, a raft of terns and gulls on a far-off sandbar remained uninvestigated and blobby. I regret nothiiiiiing!
On an interesting note, I saw a Cedar Waxwing there with an orange tip to its tail, as opposed to the expected yellow. Apparently this happens in the northeastern US as a result of the birds eating an introduced species of honeysuckle berries. Neat-o.
By the time we got to Monomoy National Wildlife Refuge (just south of Chatam, in Cape Cod’s southeastern armpit), the fog and wind had fully socked the place in, visibility was low, and most birds were keeping their heads down.
Notable observations included a pair of Eastern Kingbirds on the dunes, several Willets probing for benthic organisms in the fog, four Common Terns dive-bombing for fish (no Roseates, boo-hoo), two Snowy Egrets, a nice close flyby from an American Oystercatcher, and good views, finally, of a vocalizing Fish Crow. Nuh-uh! Nuh-uh!
At the sandy cliffs on the beach, a Northern Rough-winged Swallow got caught out by stiff winds, and it was incredible to watch its repeated aborted landing attempts and circle-rounds in the vicious gusts before a successful landing in its nest hole.
Bass Hole!
Posted by Matt Poll at 1:44 PM No comments: 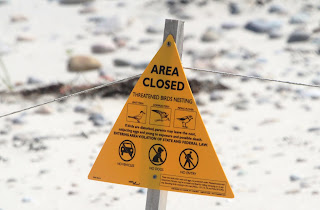 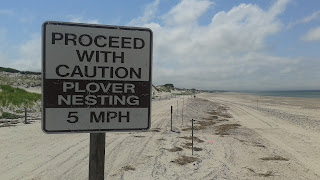 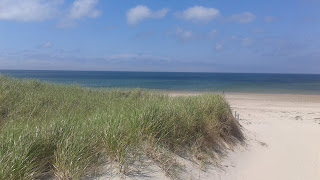 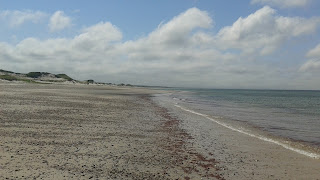 I’ve just returned from a jaunt down to Cape Cod, and managed to sneak in some rewarding birding along the way. In preparation for the trip, I flicked through my Sibley and made up a ‘dream hit list’ of about 40 species that don’t often make it up Montreal way. By the time the fog had settled and I was on the road back north, I realized that I’d checked 11 lifers off that list! Badass.
The most fruitful birding spot was Sandy Neck, which boasted a sensational mix of saltmarsh, dune, and beach habitats. The highlight there was superb close looks at a pair of Saltmarsh Sparrows. I had a string of frustrating brushes with Ammodramus sparrows along the saltmarsh trail, of the whack-a-mole-better-be-quick variety. Exasperated, and worried that I wouldn’t end up getting an ID-worthy look, I hunkered down at a promising spot by a small open pond, and let the birds come my way. After about ten minutes, they did just that (to my considerable surprise). Two cracking Saltmarsh Sparrows popped up, but instead of flopping straight back down again, they fluttered down onto a flat patch of dead grass, 15 feet in front of me. The encounter only lasted about ten seconds, but I won’t soon forget it – that is one spectacular species (and listed as "vulnerable" by the IUCN).
Several Diamondback Terrapins were seen shuffling along the trails, and the park rangers were busy moving some of their nests to less precarious spots up the dunes.
The walk towards the beach through the scrub and squooshy sand of the dunescape held its own little clique of birds: mewling Gray Catbirds, three Eastern Towhees, a Northern Mockingbird, and several Common Yellowthroats and Yellow Warblers, but sadly no Seaside Sparrows.
On the beach, the whole area where dune meets sea level was roped off for nesting Piping Plovers, a "near threatened" species very susceptible to disturbance. Walking along the beach trail (accessible to walkers and 4WD vehicles alike), I came across an adult Piping Plover noisily leading me away from the roped-off bit, which hinted that there were chicks about. I spotted one standing immobile near the dunes, perfectly camouflaged, and quickly cleared off back towards to beach to give them their space. Another spectacular bird I’m not likely to see up here!
Six delightful Least Terns squeaked and fluttered in the onshore winds, while handfuls of Herring and Greater Black-backed Gulls sulked on the waterline. Three Common Terns were also in the mix. Two Bonaparte’s Gulls were cavorting and wheeling low on the water, seeming to take pleasure in the act of flight.
Posted by Matt Poll at 10:27 AM No comments: