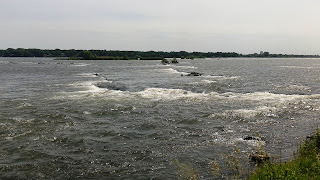 In a dream haze of poplar fluff, a lazy afternoon bimble by the St Lawrence River turned up a decent array of 'water-themed' birds.

A Sora state of affairs 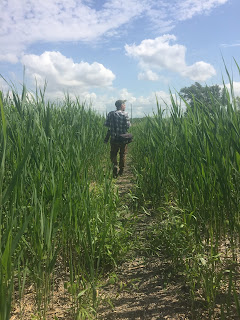 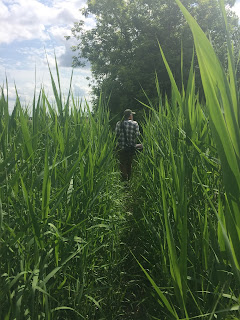 One of my favourite little off-island spots, Marais de St-Timothée, did not disappoint on a sunny and breezy morning. It’s always sunny and breezy there, it seems.
The session got off to an auspicious start with my first Eastern Coyote sighting – what an awesome creature, radiating an intense and wary intelligence. Along the bike path, Least Bitterns were out in force, first spotted far off, and then zipping across the path at eye level several times.
The long-awaited Sora sighting came as a result of a lengthy stake-out (or was it a crake-out?) after hearing the bird’s characteristic downward-cascading whinny (very Ruddy Kingfisher-like). I’m convinced that Soras are actually some form of enchanted trickster imp of the reed-beds, as they’re skilled at teleporting and vanishing and the like.
Two American Bitterns thrilled with dueling (nuptial dance?) jousts overhead, tumbling down towards the extensive reed-beds together. I got a great video of the behaviour, then promptly deleted it by hitting the wrong button. Fuckin’ buttons.


When he’s not fainting away into the bushes, Dan is an illustrator (http://dansvatek.com/). Last week he did a wicked black-and-white illustration of a Grasshopper Sparrow for a sustainable ranch, so when I told him about a recent sighting of said species down near the border, he was all in.
The spot ended up being just down the road, literally, from the U.S. border, on a quiet farm road. When a farmer rolled up on us real slow like in his pick-up, I was worried we’d be hearing a shotgun shell being wracked into the chamber and a "Why are you standing in front of my house?" Instead, we were greeted with a jovial “Have you guys heard that bird yet? There’s fuckloads of ‘em in there!” Hopefully that means the locals have only been exposed to well-mannered birders so far.
After being initially psyched out by a Savannah Sparrow (Psych!), we ended up getting onto our target with frustratingly distant, dim, and rainy views, as the Grasshopper Sparrow dueled with a cantankerous Eastern Meadowlark. It is a Grasshopper Sparrow. I swear. Or is it a bleached out hacky sack? No, it’s the Grasshopper Sparrow. Wait, is it a caterpillar tent? Or an old forgotten marshmallow? No. No, that’s the Grasshopper Sparrow, 100%.

Bring on the horrendous record shots!