An interesting few hours in the hills around Lac Gale with the Scottsman, down south near Bromont and Knowlton. If it’s Yellow-throated Vireos, Wood Thrushes, and Eastern Towhees you’re after, this could be your spot. We encountered several of each of those uncommon-in-Montreal species, with multiple Yellow-throated Vireos singing high over the trails (mostly G3 and G1).
Other highlights came in the form of two Mourning Warblers (among ten species of warbler), and a close encounter with a North American Porcupine. Weird-looking beast, it was sitting there like a primate, scratching its belly.
Be warned – the Black Flies were out in force, little bastards.
Posted by Matt Poll at 4:03 PM No comments:

Same spring, different birds. Dan gasped when he realized he had yet to see a Bay-breasted Warbler, so we set out in the rain to the loveliest of spots, Reserve Faunique Marguerite-D’Youville. Three-quarters of the trails were closed due to flooding, but it was still very birdy on the trail to the Grande Digue. In steady rain and finger-numbing single-digit temperatures, we managed to spot 62 species in three hours. RIP Dan's shoes.
Within the first 20 minutes, Dan called out “Babe-rested Warbler,” rather calmly, I thought. It was! A cracking male showed well, and Dan drank it in. Bay-breasteds are my fave wood-warbler – it looks as though some kid smeared the smushed berry colour onto a colouring book bird with their thumb (bay = baie?). And none of that unoriginal yellow. What am I banging on about? I’ll blame it on jetlag.
Other highlights included some friendly Downy Woodpeckers, clumsy lil deerlings, five Black and two Common Terns, six species of hirundines, and thirteen warbler species – with standouts being single examples of less common species like Mourning Warbler, Northern Waterthrush, and Canada Warbler. A Common Loon on the way out was a nice way to end the trip/begin the search for poutine.
Hmm, I've still got a bunch of stuff from the Yellow Sea islands to post. Jetlag, jetlag, jetlag, mumble mumble.
Posted by Matt Poll at 7:43 AM No comments: 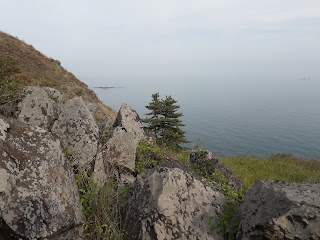 On May 9th, I focused on the north of the island and the area around the lighthouse, but the bird of the day was discovered in town. The day ended with 61 species recorded.
In and around the lighthouse valley, a Chinese Pond Heron, several Common Rosefinch, and what I suspect was a Hume’s Leaf Warbler, but probably best to leaf that one alone. Two Japanese Grosbeaks were spotted along the road to the lighthouse.
At least four Black-naped Orioles (my Korean spark bird!) were kicking around in the hills, but they’re hard to get close to, or even see…especially for a bird so loud, both visually and vocally. Squadrons of Light-vented Bulbuls patrolled most areas of coastal forest edge. A Eurasian Wryneck was lurking just out of town, and then I found something better.
In a garden on the edge of town, a spotty thrush flushed up onto a tree limb. When I got the binos onto it, I was stunned to see stark vertical slashes of war-paint across a creamy buff face – Chinese Thrush! This species was first recorded in Korea in 2003…on Socheong, of course, and there are only a handful of Korean records. I got a record shot through the gathering fog, then floated all the way back to my minbak.

The following day, I recorded 60 species on the island. It was foggy as all get-out for the whole morning, and I walked to the lighthouse valley again. Amazingly, I heard a Chinese Thrush singing there, but could not sight the bird in the pea soup. When I got back to town an hour later, the ‘original’ Chinese Thrush was still in its garden, which means there are at least two, and possibly three (the bird from the 8th was seen in another part of the island altogether) on Socheong.
The road to the lighthouse held two mysteries. A loud call stopped me in my sodden boots in the late afternoon. It sounded like a barking ape starting a reluctant car engine: wonka chonk chonka…ending with a fading wunk wup wup. Ten minutes later there were three husky dove-like coughs. Oh, and I got some shots of a weird cuckoo that I’ll puzzle through tomorrow.

A quick loop on my last (sweltering) morning on Socheong produced several new birds: a Daurian Starling, a cracking male White-throated Rock Thrush (typically camera-shy), a flyby Cattle Egret, several Common Kingfishers, and my first Asian Stubtail for the island, but definitely not the first of spring. The Chinese Thrush (I finally put up the better image I got that day) continues in its garden.
Had to rescue a Rufous-tailed Robin that got trapped in the small ferry terminal. It flew ceiling circuits for five minutes, before tiring and ramming into the window and falling to the floor. I got it in a gentle bander’s grip and released it in a flat area. It flew off looking hale, but who knows. I hope it makes it to where the winds want to take it.
Posted by Matt Poll at 5:29 AM No comments: 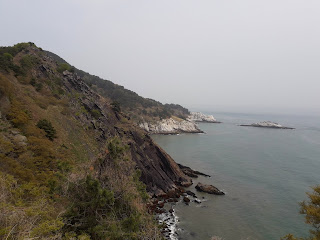 There is still stuff from Gageo I’ve got to post, but that can wait. I’ve been on beguiling Socheong Island for a few days now. It’s uncomfortably close to North Korea, and the local garrison of grinning military lads have a habit of testing their weapons at dusk – starting with rifles and heavy machine-guns, and ending with what sounds like small artillery and miniguns. So that’s had me biting my nails at night, heh heh. Guess you gotta let ‘em know you’re still keen to have a go.
On all days (May 8-10), I’ve noticed: loads of Rufous-tailed Robins; not much in the way of pipit or wagtail variety; plenty of Eyebrowed and Grey-backed Thrushes; a good number of Yellow-browed and Tristram’s Buntings; and a lot of Mugimaki and Yellow-rumped Flycatchers (but no Narcissus, which is to be expected). There are also a dozen Taiga flycatchers around the island (well-counted) – have there been similar high counts in the past?

The 4+ hour ferry from Incheon to Seocheong Island started early, and so did many of the passengers. Many rather unwisely scoffed back their greasy, spicy package-tour breakfasts, then washed it all down with the ubiquitous Korean white lighting: soju. Less than an hour out of Incheon, the seas angered. Pretty soon, the place looked like Jonestown, with ill Koreans splayed out everywhere, some weeping. I, on the other hand, was feeling smug and lovely, having popped my sweet sweet Korean Dramamine before boarding. The boat was packed so I didn’t get a window seat, which sucked, but oh well.
I hit the ground running on Socheong, going on exploratory walks around town in all directions, droning round the hills trying to figure out how the island was put together.
To my dismay and horror, pheckin phyllos were dripping from every leaf. I managed to pick through a lot of them, but I’ll admit I have a ways to go with phylloscopus warblers. There were a goodly number of Dusky Warblers around, with several Radde’s Warblers mixed in to make it interesting. Pallas’s Leaf Warblers were also present in most leafy spots.
The day ended with 50 species…no shorebirds and almost no swallows. I was thrilled to find Chestnut-flanked White-eyes in many hilly spots, a species I had long hoped to reconnect with after getting brief looks many years ago. I call them “Chesties.” What? What?
At the end of the day, I glimpsed what I describe as a scaled-down, inaccurate White’s Thrush. The next day, I would discover what it was, and…it’s a good’un!
Posted by Matt Poll at 5:03 AM No comments: