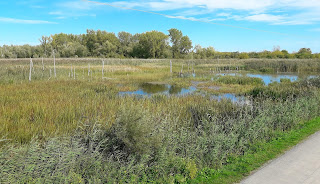 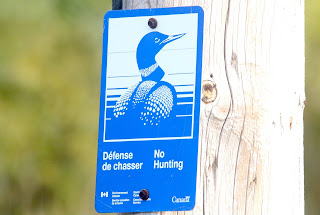 It’s been a year since my last pre-Gangneung Canadian birding jaunt. Time flies, yadda-yadda.
Yesterday’s plan was to hit the Reserve Faunique Marguerite-D’Youville hard, but an apple picking event meant that the parking lot there was full. Cars were being directed to another, massive (and full) parking lot off the island (whose gates were set to be chained shut at 5 P.M. sharp), where a shuttle bus would be taking the throngs of apple pickers to the site. No thanks, nope.
So we hit Marais de St-Timothée instead, and it while it wasn’t super birdy, it was at least peaceful – only 32 species were recorded in and around the swamp on a crisp, sunny day. Notable were at least 1,000 icterids on the move, with several flocks of 200-300 (mostly) Red-winged Blackbirds joining to form an unbroken chattering black cloud overhead at the end of the walk. Separate from that mob were four Rusty Blackbirds perched in a dead tree with two American Robins. Perhaps surprisingly for this time of year, but perhaps not, only one species of warbler (three Common Yellowthroats at the parking lot muck canal) was logged all day.
In other news, dragonflies really like me.
Posted by Matt Poll at 2:24 PM No comments: 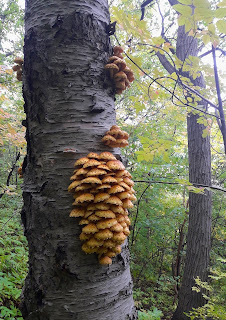 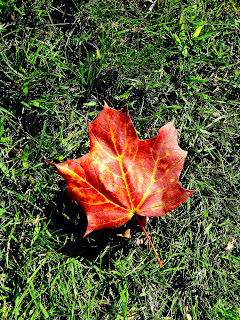 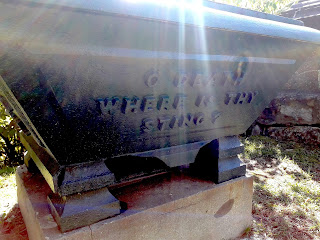 My planned ‘all-morning’ trip to the cemeteries on September 18th wasn’t as birdy as BirdCast promised, with a total of 32 species seen in four hours. Highlights: a wacky Groundhog eating apples; a Gray Catbird eating white berries (what are they?); finally caught up with the shy Eastern Screech-Owl; heard an Eastern Wood-Pewee calling from the UdeM woods; a personal first of fall Golden-crowned Kinglet; 20+ White-throated Sparrows; and an uptick (upflick?) in Flickers (5).
Eight warbler species were seen, including some tantalizing head-scratchers that had to be left unidentified. Sigh, I thought I had my fall warblers down. Yellow-rumped Warblers were out in force, especially in the NDNC, and there was a fat little warbler wave by the MRC north entrance on the way out.
It was very thrushy on Rose Hill, with four Swainson’s Thrush, a Veery, and six young American Robins making the bushes rustle.
George found a female Black-backed Woodpecker the previous day (like a boss!), but I didn’t catch up with it, and it looks like his bird was half of a pair that was subsequently seen across the street in Mount Royal Park. Cool!

Weird weather on the 23rd – windy, rainy, and overcast but uncomfortably humid, followed by an eerie dead calm. Highlights: close looks at a Cooper’s Hawk; a young Yellow-bellied Sapsucker on Mount Murray; yet more Flicker activity, with a wave vizzing south over Mountain View; several Winter Wrens in the dark peripheries; and my first Ruby-crowned Kinglet and Dark-eyed Juncos of the year for the cemeteries. Ended up with 26 species in three hours.
An exploratory Black-backed Woodpecker foray into the Mount Royal Park turned up tantalizing views of a Hairy Woodpecker-sized bird…that was probably a Hairy Woodpecker, but also some fresh evidence of Black-backed Woodpecker damage in a nice little patch of suitable habitat seemingly away from the GPS location of the sightings from a few days ago. Bird mysteries are fun.
Posted by Matt Poll at 8:35 AM No comments:

Lovely sunny weather for an early morning trip deep into Parc National du Mont-Tremblant with George and a dozen BPQers. We dipped on most of our boreal target species, although George and I heard (and recorded) the cranky rasps of a frustratingly unseen Boreal Chickadee.
We ran into White-winged Crossbills several times, which was awesome, as I’d only ever had fleeting looks in the past. The birdiest moment came, as it often does, around the parking lot before the trip officially got rolling, with eight species of warblers, among other bird action. A good variety of sparrows species were also seen on the day, and right before final tally we ran into a wee Dekay’s Brown Snake and a confusing lesser Fritillary…was it a worn Silver-bordered Fritillary?

And now for a real ‘believe it or not’ incident. On the ride back, as we passed a large mixed-vegetation field near Mirabel, George called out “What’s that?” and pointed out a bird slowly flying over the field. “Owl!” I yelped, without thinking.
The bird was slightly more compact and ‘nubby’ than a Ring-billed Gull, and showed dirty white underparts, with darker markings glimpsed near the round-looking wingtips. The stumpy head and odd ‘awkward-yet graceful/balancing on the head of a pin’ flight pattern made ‘Harrier’ flash to mind for a split second, before I got a better look at the aforementioned characteristics. The encounter was over in all of ten seconds, but the overwhelming jizz I was left with was that of a Short-eared Owl hunting (I spent a whole afternoon watching a pair hunting low over a field during the day several years ago in Korea).
The next field we passed had some Ring-billed Gulls over it, and the contrast couldn’t have been any starker (shape, size, colour, flight attitude). The first bird was not a gull. So was it a Short-eared Owl? Only if you believe such an unlikely bird could be responsibly identified after a ten-second look while zipping down the highway. Believe it…or not.
Posted by Matt Poll at 12:56 PM No comments:

George, Shrijeet, and I struck east today for six hours of birding in Montreal’s far east end. Thanks for driving, George! There were entertaining rivulets of warblers at PN de la Pte-aux-Prairies/Secteur du Fleuve to pick through, and a nice Philadelphia Vireo. The skies morphed from summer to autumn over the course of the day, but that was bound to happen. I like it.
At the ‘Secteur des Marais’ of the same park, Shrijeet and George saw a Virginia Rail-sized blob zip across the path into thick lacings of reeds. We then heard (and recorded) some classic Virginia Rail tweeking sounds (shakes fist at the reeds).
Parc de la Coulée-Grou is a bit of an interesting spot. Not so much a park as what looks like the site of a planned housing development that has been overgrown for about 20 years, with several promising swampy patches hidden away. In the water hazard of a golf course, we found eight Common Gallinules (including juvies), a  young Pied-billed Grebe, and a showy Belted Kingfisher holding court. Good times. 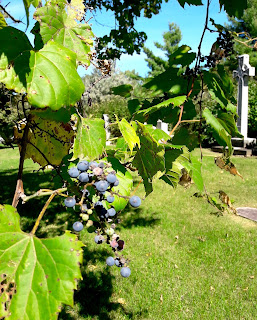 Not waves…ripples. Most of the better ripples were in the NDNC, and it felt birdy overall, on a morning-afternoon that slid from chipper single-digits to sweaty death-sun. Spent almost five hours roaming, and ended with 42 species, 12 of which were warblereenos. Warbleronees? Bumped into Louis and George, and JSM himself was out and about today but I missed him.
Not much raptor action, but some fun personal fall firsts like BHVI and WIWR. Up on Mountain View, I gave myself ten minutes to wait around for the Olive-sided Flycatcher to return, but I got bored, so I loosed a laconic pish. Blam, a Lincoln’s Sparrow popped up 15 feet away and gave me a funny look. I think I woke it up. Sorry, Lincoln’s Sparrow, go back to bed.
There appears to be extensive Japanese Beetle damage on the leaves of some ornamental flowers, which a lady said weren’t there last year. Then she asked George and I questions about Raccoon migration season, and we did out darndest to answer her. We were all honoured to meet each other.
Spotted a European Common Blue butterfly, which was only first recorded in Quebec 15 years ago, introduced via Mirabel airport. Neat. Apparently the species has lost 96% of its worldwide population due to habitat loss. Not neat. We’re all doomed.
Anything good happen for Friday the 13th? Nothing, except when I turned an ankle in an invisible groundhog hole, causing my jaws to slam together. I saw lightning and came to lying in the grass, not knowing what planet I was on (again). I cursed lustily and did backflips all the way home.