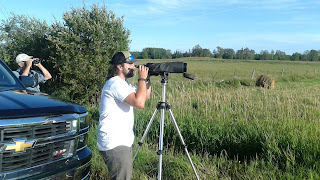 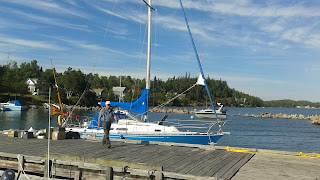 Today was spent in rugged Silver Islet loading up the boat with food in preparation for tomorrow's trip out to the research station. See you in October!
Posted by Matt Poll at 10:04 PM No comments:

In the land of sleeping giants


Made it to Thunder Bay after an always grueling and often eventful 28 hour bus trip. I...could have taken a three hour flight but I had the vague adventurous notion of 'seeing that part of the country.'  Well now I've done it, so I suppose I don't ever have to again. PS I lost my sausage in Ottawa.
Went for a hike up Mt. Mckay and got a good look at the Sleeping Giant's feet where I'll be staying until the frost arrives. Saw my first ever Black Bear up there, a lanky youngster. Badass! Also a tree frog, a juvenile Bald Eagle, a female Peregrine, some Juncos and White-throated Sparrows, and a Magnolia Warbler. I wonder if they all breed locally? Anyhoo, I'm knackered. This may be my last post for a while, but I'm right there, sleeping on the sleeping giant's pinky toe.
Posted by Matt Poll at 3:56 PM No comments:

The Mystery of the Relict Habitat / Adventure at Thunder Cape...

...and other Hardy Boys classics. For the past several weeks I have been investigating credible reports of several birds in the NDG area that must for now remain unmentioned. That is because there are no records of this species in the central area of Montreal for at least the past century, and I don't want to be labelled a whack-job. If I can secure evidence of these birds, it could indicate a small, unknown relict population - exciting! It's not exactly an Ivory-billed Woodpecker level of excitement, but it's enough to get me out of bed. I'll find them.


In other news, in a few days I'm headed off to windy shores of Lake Superior to spend a month or two at the remote Thunder Cape Bird Observatory (near Thunder Bay). That oughta be an experience and a half, I'm well chuffed.

http://www.tbfn.net/thunder-cape-bird-observatory
Posted by Matt Poll at 9:06 PM No comments:

Bike birding is tops
No licence is no problem
Don't crash when birds pass
Posted by Matt Poll at 8:59 PM No comments:

(Here are two more brief excerpts from my thingy I'm working on:)

Thus read my daily dinner menu for the last week of April 2013, while I was staying at the grottiest little inn South Korea had to offer. The meals were prepared by the gruff-bordering-on-friendly curly-permed lady that ran the place. For most of my three-week stay, I was the sole guest at the minbak, and the woman doted on me like I was the last grandson on Earth. This was sweet, but not always conducive to a relaxing meal.
Minbaks, Korea’s ubiquitous rural dwellings, are essentially hotels without beds, or indeed most other amenities traditionally associated with the hospitality industry. Like soap, for example, or a dependable hot water supply (minbaks are also known to be reliable homes for fiendishly outsized spiders that hide out in shoes). Despite these privations, I absolutely loved staying in minbaks, as they were unpretentious, easy, and cheap – just one grimy step above camping.

I am no fan of fried chicken. It’s the kind of uninspiring fare I will end up eating maybe once a year, socially. Koreans have come to love the stuff. There are grubby little “Hof and Chicken” places pocked throughout Korean cities, where one can find a half-dozen chain-smoking Korean men in their forties slumped over wobbly tables, gargling back pitchers of watery beer and baskets of heinous fried chicken. The chicken is extra greasy by Western standards, and always includes one horrid bendy neck piece, just to throw a wildcard into the mix. The widespread ritual of eating fried chicken and drinking beer (mekju) has spawned its own Konglish compound word: chimek. As in, let's go for chimek tonight.
On Gageo Island, there are precisely three restaurants...sort of. The mainstays are the two minbaks that dish out spicy shiksa to hungry guests. Shiksa means “meal”, and after eating my potent fish head soup and kimchi for a week, I had had enough. To make matters worse, Granny had taken to bringing me two bowls of the standard nutritionless and bloaty white rice with my shiksa. Two bloody bowls! On my first night I made the mistake of telling her that I was very hungry, in my cutesy, broken Korean, and from then on, she insisted on bringing me an extra bowl of rice, ignoring my earnest and repeated protests.
Spicy fish head soup is fine for someone so omnivorous and cosmopolitan (har har) as myself, but not every night for three weeks. I was growing weary of staring into the dead eyes in my bowl, then running up and firing off lava lasers (there’s an old Korean joke about how eating too much spicy food makes one’s arse look like the Japanese flag). I noticed the third restaurant on the isle was a fried chicken place which looked open, but I could never find anyone inside that was willing to serve me food. The first time I walked past, I wrinkled my nose and headed off for my nightly fish head soup and too much rice. After a while, the idea of eating something other than shiksa started to overwhelm my disdain for fried chicken. So, for a week I popped my head through the door and enquired about getting a plate of crispy necks. On the uncommon occasions when someone was present, I was repeatedly shooed away with a sighs and a dismissive “Yea OK OK, later later,” in Korean.
Word must have gotten around that I was after fried chicken, because a few days later, Head Honcho and his cop sidekick, along with four other unsavory, puffy-faced Korean guys summoned me over to their table in my minbak’s dining area. They had a large turquoise plastic basket of fried chicken sitting between them, and were all beery smiles and glassy eyes.
“Sit down and eat, and drink beer with us!” they urged. Amicable shoulder-slapping and a short flurry of broken Konglish ensued, as we exchanged skeletal life resumes over beer and fried chicken.
Or...was it chicken? The pieces seemed smaller than your average fried chicken bits, and the meat was a touch on the dark and gamey side. After tucking suspiciously into my third piece, I offered: “This is good...chicken?”
Titters and quick knowing glances around the table. The drunkest of the red-faced man-o-lanterns blurted out: “No no! Chicken nooo! San! Bidulgi! San-bidulgi!”, while pointing his thumb up through the wall in the general direction of the mountain ridge that forms the backbone of the island. San, in this case, means mountain, and bildulgi means pigeon.
Mountain pigeon. I am eating Mountain Pigeon. I stopped chewing the wad of meat that was in my mouth, apprehension flushing heat into my cheeks. The only pigeons up on the mountain were Black Wood Pigeons, a near-threatened species. This was by no means a common species (a “Wow!” bird, in South Korea), and was confined to breeding on small, lightly inhabited offshore islands. And here I was on a small, lightly inhabited offshore island...eating one?
“Muhhhhhh...?” I said. The cop and another guy laughed nervously, and tried to brush the man’s comment out of the air with the power of their sweeping hand motions, then made “He’s crazy” finger-spinning-next-to-head gestures. Head Honcho leaned back and hissed something into Drunkest Guy’s ear about me being a “bird person”, and the subject was changed clumsily over to the weather, with uneasy smiles all around.
I laughed it off as though I believed their wavering denials, but I quietly spit out the mouthful I was chewing into a napkin and retired soon thereafter to my room, holding my theatrically full belly and backslapping my way out of the dining room. Holy shit I just ate Black Wood Pigeon! I despaired as I slunk off to bed.
Ah, Korea, the land where they fry up endangered birds and feed them to visiting birders. I headed into the hills the next day, watching the few Black Wood Pigeons I came across with a careful new eye. I silently exhorted them to be more wary of people (they are a skittish species to begin with), while hoping they couldn’t somehow sense traces of their kin on my morning breath and fingernails.
I wish this scene had a more satisfying resolution - a Scooby-Doo style ending that saw the hangdog perpetrators being cuffed dockside while I stood there with arms folded and a satisfied smirk on my face. “We’d have gotten away with it too, if it wasn’t for that darn meddling foreigner!” But that didn’t happen. I relayed my story to fellow birders, but they were strangely dismissive of the tale. Perhaps they didn’t want to believe it, or simply felt that I had read the situation incorrectly. Maybe I had. Or, maybe there’s a secretive Kentucky-fried Wood Pigeon-eating subculture operating on Gageo Island, obfuscated by a shady island Omertà. Only the Wood Pigeons know the truth I suppose.
Posted by Matt Poll at 11:17 AM 2 comments: