Bird News from Matt Poll and Matt French, Jeju Island, April 25, 2010
A great sunny day for birding in a Seogwipo park. About 40 Barn Swallows and five Red-tailed Swallows gorged on clouds of flying insects over the river. Ten Asian House Martins were mixed in with the swallows. Looking at my lists, I spotted a similar mix of swallows and martins in the same location on May 3, 2009. Several Pacific Swifts patrolled at a higher altitude. Only one Brown-headed Thrush was seen, along with several Pale Thrush and a sharply-marked but elusive male Eye-browed Thrush. Three male Narcissus Flycatchers fed from branches near the river, and chased each other around. Three additional Narcissus Flycatchers were seen in another Seogwipo park. The cumatilis Blue-and-white Flycatcher (split to Zappey's Flycatcher in 2012) remains in the park. At one point a 'mystery bittern' flashed past. I didn't get a good look, but if I had to guess, I would say it was a Yellow Bittern. Also in the park: a Common Kingfisher, two Striated Herons, two Bull-headed Shrikes, a half dozen Olive-backed Pipits, a pair of Stejneger's Stonechats, several Eastern Crowned Warblers, and an Asian Stubtail. A Cattle Egret was seen in a nearby farmer's field.
On the same day my friend Matt French saw some interesting birds on the west coast, north of Moseulpo. He spotted a Far Eastern Curlew, several Black-winged Stilts, Cattle Egrets, Coots, and Wood Sandpipers.

Seogwipo, Jeju island, April 15, 2010
Still unseasonably cold on Jeju. A 'thrushy' day in a Seogwipo park, with a White's Thrush, a dozen Dusky Thrush, a similar number of Pale Thrush, and now at least six Brown-headed Thrushes seen furtively foraging next to a stream. Several dozen Barn Swallows swooped over a river and rested on rocks. They scattered when a Peregrine Falcon swept through the small valley at a very high rate of speed, ominously leaving a contrail of small blue and white feathers behind. 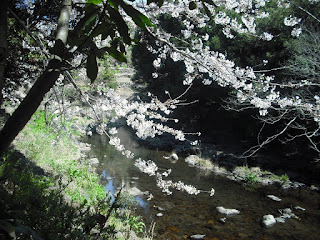 Seogwipo, Jeju island, April 13, 2010
Very strong northwesterly winds and sunny fresh weather in Seogwipo. One male Ashy Minivet was seen in a Seogwipo park, in almost the exact same spot where three were seen last year (April 18, 2009). It was very approachable, as it fed on caterpillars and flowers next to a stream. It made a distinct rapid trilling 'sheee-reeep' call. Numbers of Pale Thrush in the park seem to have swelled to about a dozen, with at least three Brown-headed Thrush also seen. A gang of about a dozen skittish Dusky Thrush remains in the park. Several Olive-backed Pipits and White-cheeked Starlings were also spotted. West of town, a male Blue-and-white Flycatcher (this one a cyanomelana) fed next to a dry riverbed. Barn Swallows have become noticeably more plentiful, with clouds of 20-30 seen above most fields and areas with water.

(*Note: This is a “historical post.” Whereas I started birding in Korea in 2005, this blog has only been active since early 2012 - these posts are an attempt to consolidate my early birdventures from the various blogs and websites where they reside, largely from the “Archived Bird News“ section of Birds Korea’s excellent website: http://www.birdskorea.org/Birds/Birdnews/BK-BN-Birdnews-archive.shtml. Find more historical posts by clicking on the "Historical posts" tab at the bottom of this post.
For this post, most of images are lamentably poor-resolution screensaves, as many of the original photo files were lost in the infamous computer crash of 2011.)
Posted by Matt Poll at 9:07 AM No comments:

Seogwipo, Jeju island, April 11, 2010
Another mild and overcast day on Jeju. In a Seogwipo park, a seemingly exhausted Blue-and-White Flycatcher initially had me scratching my head, due to the black lores, but lack of black on the face and breast. It turns out this was a cumatilis Blue-and-White Flycatcher (*Split into “Zappey’s Flycatcher Cyanoptila cumatilis in 2012). This is the first time I've seen this subspecies, and is also a personal first flycatcher of the year.

Bird News from Matt Poll and Youngho Kim, Southwest Jeju island, April 10, 2010
An overcast day and mild for some great birding on Jeju. Near Sagye, two pairs of Garganey, several Eurasian Teal, a Buff-bellied Pipit, and a half dozen Wood Sandpipers were seen on a flooded field. A dozen White-cheeked Starlings perched on nearby power lines. Close to Seotal Oreum, a Meadow Bunting and several Yellow-throated Buntings moved through some bushes. In the same field where the Long-tailed Shrike was seen last week, several Far Eastern Cisticola, a Japanese Quail, and a lone Stejneger's Stonechat (compared with 40 last week) were spotted, but the best was a Greater Short-toed Lark that showed well as it foraged on a dirt trail.
Ten Pacific Golden Plovers, a few Little Ringed and Kentish Plovers, several Marsh Sandpipers, a Black-winged Stilt, a Spotted Redshank, and several Dunlin just starting to assume breeding plumage were spotted in various nearby wetlands.
Best for the day was a beautiful male Citrine Wagtail busily hopping from rock to rock in an artificial pond. Apparently the last time a Citrine Wagtail was sighted on Jeju was in 1999.
At Yongsu reservoir, several Pintails, two more Black-winged Stilts, and a handful of Eurasian Teal, Garganey, and Shovelers remain.
In belated Seogwipo news, two Brown-headed Thrush were seen in a Seogwipo park on April 8th, in the same spot where three were seen last year (on April 23, 2009).


Seogwipo, Jeju island, April 5, 2010
A sunny and cool late afternoon in Seogwipo's harbour. Three Little Grebes were seen - two in summer plumage, and one still in winter plumage. Several Great Crested Grebes were also near the harbour, in summer plumage. One Arctic Loon, one Pacific Loon and a Red-throated Loon floated lazily close to shore. The Pacific Loon was oiled, and was vainly trying to peck the oil out of its feathers. The Red-throated Loon was later seen laying on the sand - something I've never seen a loon do before. A pair of Pacific Reef Herons were seen engaging in courtship behaviour - the male spreading out his wings and displaying his nuptial feathers, until the female flew away - a process that was repeated several times. The female was noticeably smaller, and was a paler gray colour than the male.

Bird News from Matt Poll, Youngho Kim, and Robin Newlin,
Jeju island, April 3, 2010
A sunny and cool day for a long and satisfying day of birding on Jeju. Youngho was both a gracious host, and an excellent source of local bird knowledge, as usual. At Gangjeong, a large raft of Great Crested Grebe, most in the process of assuming gorgeous summer plumage, was seen at the proposed site for an 'eco-friendly' naval base. Also, a huge (200) collection of loons drifted and fed just offshore - mostly Black-throated, with some Pacific mixed in. At Jungmun, good looks at a singing Japanese Bush Warbler. Vocal and brightly-marked Grey-capped Greenfinch were teeming in the bushes, and a Black-faced Bunting was also spotted.
At a nearby stream (where in recent years a female Plumbeous Redstart has been seen!), Grey and White Wagtails, Great Tits, a Common Kingfisher, and Yellow-throated Buntings were seen. Near Sagye-ri, a Little-ringed Plover, and several Green Sandpipers waded through flooded fields. Also, a Hoopoe, and a Richard's Pipit.
In farmer's fields near the remains of a World War 2-era Japanese airfield, best for the day was a vividly-marked but secretive Long-tailed Shrike, which showed well as it perched briefly. A probable second one was later seen flying fast and very low to the ground (MP only). Also in these fields, several prominently perching and vocal Far Eastern Cisticola, at least 40 Stejneger's Stonechat (mostly male), a Japanese Quail, a Dusky Thrush, and at least 400 Far Eastern Skylarks.
A confusing collection of thrushes zipped secretively through the tree-tops of nearby pines. Several Pale Thrush were spotted and heard. The striking orange and white chest of a Brown-headed Thrush was glimpsed (MP only), as was the sharp white supercilium of Naumann's Thrush - RN only (rare for Jeju?). Several female Red-flanked Bluetail lurked in the underbrush.
At a small beach near Gosan on the west coast, four Black-tailed Godwits, a Great Knot, a Little Ringed Plover and a Kentish Plover fed on the tidal flat, until flushed by a low-flying Kestrel. Sadly, a dead oil-stained Ancient Murrelet was found on the beach.
At Yongsu reservoir, a Black-winged Stilt was spotted near a large assortment of egrets. At most locations, Barn Swallows were flying low in loose groups of 10-20 birds. Several Pacific Swifts were seen mixed in with the swallows. Near Moseulpo, about 50 White-cheeked Starlings bowed power lines, with at least one Red-billed Starling seen mixed in among them.

Some notes from the time:
Another birder friend from the mainland came down to see the vaunted Green Pigeon on Friday. He found it, and on Saturday we spent a grueling but rewarding 10 hours birding with my Korean birding amigo. Best was a Long-tailed Shrike (a sweet lifer), and we also saw plenty of singing Japanese Bush Warblers and handsome little Stejneger's Stonechats. Worst was a dead oiled Ancient Murrelet. My K-b-amigo, who apparently studies dead birds, picked it up and put it in a bag, which sat on the floor of the car. The murrelet was pretty ripe, and pretty soon the car was smelling quite deathy. At the next stop, we wisely tied the bag to the roof rack, but I think murrelet legs were dangling out of the ragged little sack, because we got some 'WTF?' looks from other motorists. At least the car smelled a lot less deathy.

(*Note: This is a “historical post.” Whereas I started birding in Korea in 2005, this blog has only been active since early 2012 - these posts are an attempt to consolidate my early birdventures from the various blogs and websites where they reside, largely from the “Archived Bird News“ section of Birds Korea’s excellent website: http://www.birdskorea.org/Birds/Birdnews/BK-BN-Birdnews-archive.shtml. Find more historical posts by clicking on the "Historical posts" tab at the bottom of this post.
For this post, most of images are lamentably poor-resolution screensaves, as many of the original photo files were lost in the infamous computer crash of 2011.)
Posted by Matt Poll at 10:29 AM No comments: