Slow bird week, so here are some other critters of late. Raccoon Dogs have always been one shifty paw ahead of me - I'd never gotten a good look at one, until last week. A few days ago I stumbled round a bend and saw two pups sitting on a path. We stared at each other for about four seconds, before they clumsily loped off. I'm hoping to clumsily lope off to Dolsan tomorrow, to get a much-needed break from Suncheon, and perhaps see if any fall migrants are kicking about.
Posted by Matt Poll at 9:07 PM No comments: 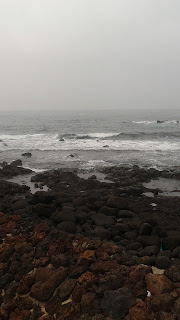 Lacking a better idea and daydreaming our way through life, Helly and I returned to Jeju for our brief summer holiday. It was definitely odd being back after leaving for the last time...again. A lot has changed in a year, for the worse. Voracious development, mostly fueled by Chinese money, continues unabated. Chinese condo towns, looking like ugly concrete tombstones for Jeju's environment, have sprouted up on once-quiet slopes of Halla Mountain. Sleepy coastal towns now invariably have several nouveau-Bohemian establishments marring the scene. These are usually garishly-painted fish and chip shops or cafes, run by Korean guys with moustaches and Peruvian pants, and they all offer an identically bland experience. There is the mandatory surfboard out front, broadcasting the generic 'funky' hippy decor inside, for the clots of selfie-stick-wielding yuppie mainland tourists to take pictures in front of. I'm not buying it any more.

Rants aside, it was great to wander through the vestiges of my one-time patch, and see a few old friends. On the 29th, we chose the hottest day in 73 years to visit Gapa-do (41ºC), and it was miserable. Very few birds in evidence, no shade to speak of, and hours to kill before the return ferry. Shambles.
The next day, I met up with good ol' Mike pre-dawn to walk a trail where Fairy Pittas and Black Paradise Flycatchers breed,and where I've heard Northern Boobooks and Ruddy Kingfishers (shakes fist at sky, swearing lustily) in the past. We encountered P-flies at several spots on the river, mostly younger birds from this summer's brood. The young birds have blackish eye-rings and bills, as opposed to the shocking blue on adult birds. At one point, a young P-fly was 'playing' with a young Great Tit, and it was amusing to watch them take turns chasing one another around a tree, seemingly having fun doing it.
Frustratingly true to form, we heard several Boobooks, often from quite close overhead, without seeing one. We also heard what was probably a Ruddy Kingfisher, or possibly a very odd woodpecker.
I managed to get one new bird on the trip - a Swinhoes's Storm Petrel from the boat before getting to Jeju.
Currently back in Suncheon, waiting for the heat bubble to break, being turned into (more of) a reclusive curmudgeon by it.
Posted by Matt Poll at 8:04 PM 2 comments:

Double-dipping Part 2 AKA 'My Legs Hurt' 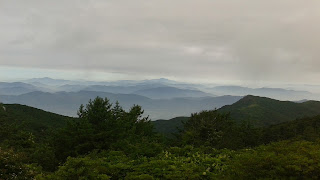 Following another 'twitchy' hunch, Subho, Helly and I headed north to Jiri-san ('san' = mountain) at the ungodly hour of 4:30 a.m. on July 10th. The trip was ostensibly exploratory, but I think the true motivating factor that got Subho out of Seoul and me out of bed was the chance of seeing Spotted Nutcracker at the peak, and perhaps Ruddy Kingfisher (shaking fist at sky) in the lower valleys. Fitting my 'Twitching is crap!' narrative well, we predictably didn't spot either of those species. I believe we picked a peak that was slightly too low, as Spotted Nutcrackers move higher in summer. That's how she goes.
The best bird of the trip was a surprise Hazel Grouse that appeared in the trees above us as we halted on the trail for several minutes to get a better look at some buntings. The Hazel Grouse is a cryptic species, letting out a deceptively high-pitched call for a bird of its size. It also hangs out in trees much of the time, whereas it seems like it should be more of a ground-dwelling bird (which it often is). We also got looks some very grey Bull-headed Shrikes, young Japanese Bush Warblers, and Pale-legged Leaf Warblers, among the more common woodland species. Click here for better Hazel Grouse images: http://snowyowllost.blogspot.kr/2014/02/big-weekend-in-seoul.html
Before we started the descent, I looked at the map and scoffed "Four hours to walk two kilometres? Ha! We'll be down in an hour and twenty minutes!" I was very soon eating my words, as the trail was extremely steep, and made up of a hellish series of uneven and slippery mini-boulders. To put an exclamation point on the matter, it started raining...we're talking Forrest Gump rain...halfway down. I was limping and sodden by the end, and my knees ached for several days after. As for my calves - they were wrapped in the rusty barbed-wire of extreme soreness for over a week.
In spite of all those tribulations, we may just have to have another go at Jiri in the winter. I hear those nutcrackers are easier to see in winter, and there are Alpine Accentors up there too.
In other news, it has been egg-fryingly hot and humid in Suncheon these days. I'm about to head out into the pre-dusk cool to continue my unending Watercock hunt, inspired by something an old man muttered to me the other day. "Watercocks? Oh yeah, there are tons of them on the other side of that river." Here's hoping he wasn't talking about the 1980's.
Posted by Matt Poll at 1:38 AM No comments:

It has been a hot and humid summer in Suncheon, but by no means has it been slow on the bird front. It seemed like three of the four pairs of nesting Chestnut-cheeked Starlings had left the area by June 17th, with only one female spotted attending what sounded like several young. On July 10th, one adult male was seen attending a nest, perhaps with only one juvenile inside. By July 15th, the sole Chestnut-cheeked Starling seen was a juvenile, finally out of the nest, flying to a group of nearby trees and back to the nest repeatedly. Perhaps in the vain hopes of being fed? On July 26th, with Tim Edelsten, we were surprised to see an adult male and a juvenile/female type, at a site several kilometres away from the main nesting area. Could these have been members of the late-nesting family at the original site, or different birds altogether?

At Suncheon Bay on July 15th, after a tropical storm passed east of the area, I made out two terns in the morning gloom. A Whiskered Tern moving into non-breeding plumage, and a more sluggish tern with a heavy-looking black bill that looked good for Gull-billed Tern. When I returned the next day for a further look, a single Little Tern and two buoyant Whiskered Terns, all in crisp summer plumage, were spotted over the mudflats. Also of note on that day was a single Black-faced Spoonbill, a Yellow Bittern, increasing shorebird numbers, and several Black-headed and Saunders’s Gulls.
Perhaps the most surprising July sighting at the bay was a Eurasian Bittern on July 10th, which would appear to be one of the first summer records for this species in the ROK. Is this the same bird that has been sighted here throughout the late winter and spring? Why is it apparently spending the summer at this site?
Small numbers of Greater Painted Snipe have been seen but mostly heard throughout this period, at three separate sites, on six different dates. At least a dozen Terek Sandpipers on June 17th seemed a notable summer record. A Eurasian Hoopoe was also seen that day at the bay, and again on July 19th. On July 10th, about ten Pacific Swifts were spotted, as well as a similar number of Barn Swallows, with three Red-rumped Swallows mixed in.
By August 3rd, the Oriental Reed Warblers at the bay had all gone quiet. This silence may perhaps be related to the scruffy and vulnerable juveniles seen clumsily trying out their wings among the reeds.
Posted by Matt Poll at 7:20 PM No comments: