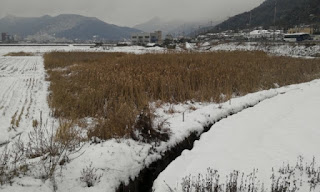 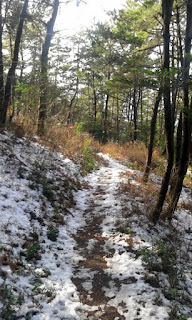 A heavy snowfall overnight painted a bright new landscape around my local patch, and there was plenty of interesting bird activity, with close to 60 species seen. I saw a few personal Geoje firsts, some unexpected birds, and a lot of the birds seemed to be acting edgy and strange because of the snow. ‘Hungrier’ all of a sudden, maybe. I was stunned to see a Bull-headed Shrike locked in a life-or-death dogfight with a bite-sized Eurasian Wren, and they flew around me at close range before vanishing behind a group of trees.
Also acting uncharacteristically aggressive was a reddish Eastern Buzzard that was actively cruising the fields at low level, perhaps taking advantage of how visible small birds were against the snow.
Most of the action was going on in a scrubby/reedy corner of a large set of fields. Two Little Buntings (a personal Geoje first) were confiding in a ditch, while a Far Eastern Cisticola and Pallas’s Reed Bunting were a lot less open, skulking in the reeds. A group of 25 Skylarks, not usually seen on this side of the island, shimmered nervously through the fields as a Northen Goshawk, Eastern Buzzard, and Eurasian Kestrel took turns making low passes over the field. Also in the fields, a flock of close to 30 Chinese Penduline Tits, dozens of Buff-bellied and Olive-backed Pipits, and perhaps six Common Snipe.
On the mountain trails, several Hawfinch (also a personal Geoje first), a confiding male Red-flanked Bluetail and later at least a half-dozen females. I also ran into the resident small flock of Eurasian Bullfinch, made up of five females, a male rosacea, and a male ‘griseiventris-type’, which I photographed earlier in the week.
The nearby canals and especially the harbour were teeming with winter bird activity. Common and Black-headed Gulls outnumbered Black-tailed Gulls where the canal meets the harbour, and at least a hundred Great Crested Grebe formed loose rafts further out. Also on the harbour, about 60 Common Pochard, and a handful of Greater Scaup, Tufted Duck, and Common Goldeneye.
Posted by Matt Poll at 3:33 AM No comments:

It's been a quiet week on the isle. Today I went back to 'Black Wood Pigeon Island' in hopes of a midwinter surprise, but it was quiet. Even a two-hour stakeout of 'The Glory Bowl' revealed no sign of Long-tailed Shrike or Light-vented Bulbul. A confiding flock of nearby Chinese Penduline Tits always makes my day.
Posted by Matt Poll at 2:36 AM No comments:


It was a great day of birding with friends new and old, and close to 75 species seen. A frigid, windy dawn and several great species awaited us at the Nakdong River. A distant, shimmering scope view of two Steller’s Sea Eagles was a great way to start the day - their stocky and imposing presence was evident even at a distance. Also along this stretch were several Eurasian Curlew, a Eurasian Oystercatcher, and a healthy assemblage of gulls.
Closer to Dadaepo, a Light-vented Bulbul was spotted mixed in with a large flock of Brown-eared Bulbuls roiling through the treetops. This represents the first record of Light-vented Bulbul for the Busan area, more evidence of a species steadily colonizing the ROK. Dadaepo was fairly quiet, with several Eurasian Bullfinch and Pale Thrush in evidence.
At Junam, we quickly spotted nine Swan Geese, a great sight to watch as they broke through ice in the fields to feed. Also of note at Junam were nine White-naped Crane, two White-tailed Sea Eagle, and several rotund Brambling.
Posted by Matt Poll at 2:10 AM 2 comments: 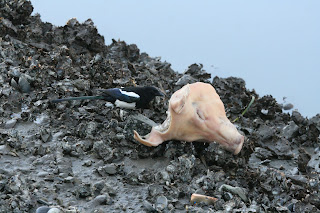 Magpies will eat anything.
Posted by Matt Poll at 3:10 AM No comments:

Geoje birds over the past few weeks

It's getting coooooold! The winter ducks are starting to arrive in force on the saltwater canal near my apartment - mostly Spot-billed, Eurasian Wigeon, and Eurasian Teal. I've noticed at least a dozen Little Grebes on this same canal - they seem to be much more plentiful than last year.
Posted by Matt Poll at 6:26 PM No comments: