The Forest Rangers - 'The Bird Watchers' 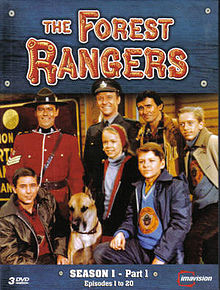 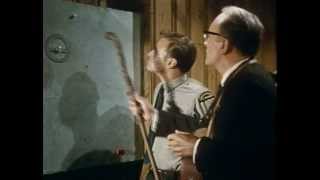 I used to watch repeats of this nutty old show back in the day. The birdwatchers in this episode are tangental to the silly Hardy Boys-esque backwoods tale of intrigue. Still, it's fun and cringe-worthy watching the stodgy British birder do his thing.

Click here to watch the episode
Posted by Matt Poll at 9:24 PM No comments:

Email ThisBlogThis!Share to TwitterShare to FacebookShare to Pinterest
Labels: Video 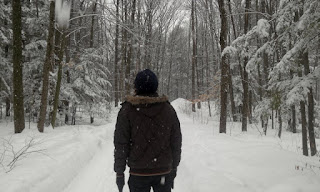 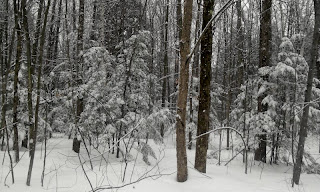 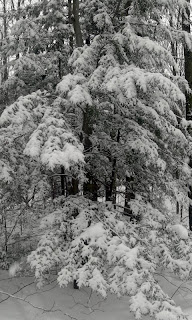 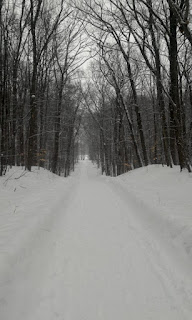 It was a snowy and warm Saturday, with plenty of dog walkers on the trails. We finally spotted an unmistakeable Hoary Redpoll mixed in with the Common Redpoll near the main lodge. Another highlight was long looks at a Red-bellied Woodpecker, this time a male. Nothing owly to report.
Posted by Matt Poll at 7:36 PM No comments:


Dan and I have been feeding Chickadees at the Arbo since we were wee tots. We checked out the arbo last Saturday, and I decided to test how long a Chickadee would tolerate me bouncing my hand around for. Five seconds is the answer.
Posted by Matt Poll at 7:28 PM No comments: 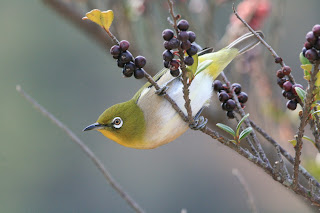 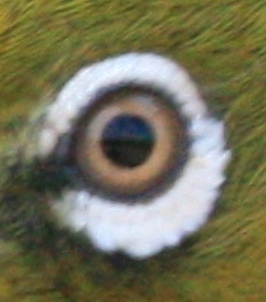 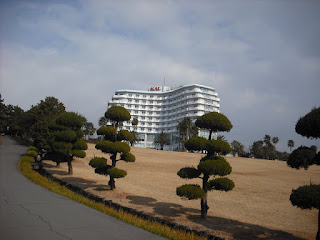 I was sorting through some old pics and came across the pic of a Japanese White-eye (Zosterops japonicus known as Warbling White-eye as of 2019) that graces the top of this page. I took it at Seogwipo's KAL Hotel way back in January 2009, and the neat thing is that if you look closely in its eye you can see the hotel, sky, and manicured lawn reflected!
Slow bird week. Oh, I went to the Arbo on Saturday, I'll put up a post about that.
Posted by Matt Poll at 4:16 PM 2 comments:


Looking at Dan's creepily bad cellphone pic of the Barred Owl (or is it The Mothman?), I was reminded of a picture I took wayyyy back in 1988 while on a PQSPB trip in Lasalle. Everyone was looking at a distant Osprey though a spotting scope, and I asked if I could take a picture of it by putting my mini 'comic-book' camera up to the scope. Everyone scoffed, but I went ahead and clumsily fitted the tiny camera to the eyepiece and clicked. When the picture came back, I was shocked to see it had actually come out. My first bird picture - caveman digiscoping! I recently saw that pic again, in Dan's old bird diary. The old and more recent comments crack me up.
Last year, in a nod to that incident, I held my cellphone camera up to JP's scope to get a picture of a ripping Tiger Shrike on Geoje, just for giggles.
Incidentally, I got that mini camera by saving Bazooka Joe comics, not out of a comic book.
Posted by Matt Poll at 8:55 PM No comments: 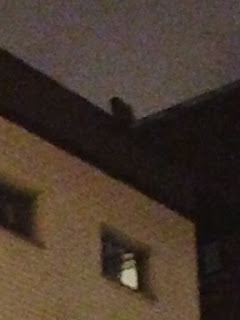 Dan spotted this Barred Owl last night in the McGill ghetto and got a bad cellphone pic of it.

"It swooped over the car. I let out a high-pitch squeal, stopped the car and jumped out, n' ID'd it with binos. I don't think my bandmates ever saw me get so excited over something."
Posted by Matt Poll at 10:06 AM No comments: 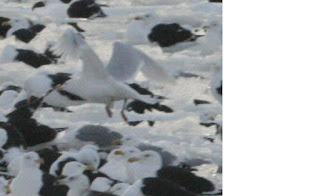 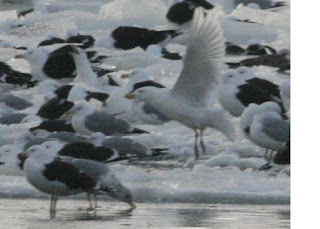 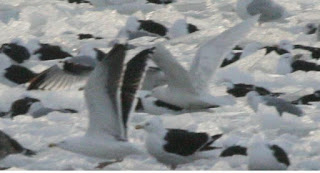 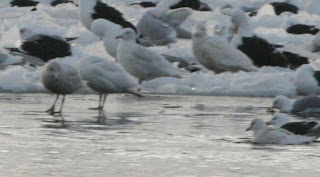 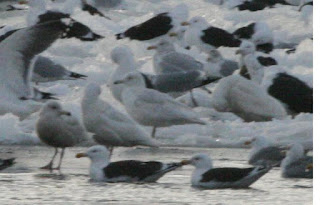 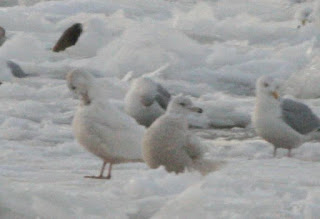 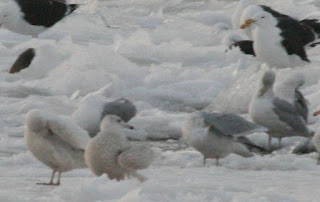 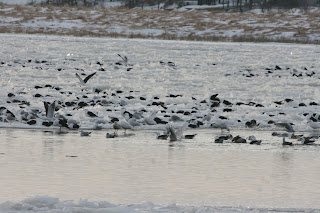 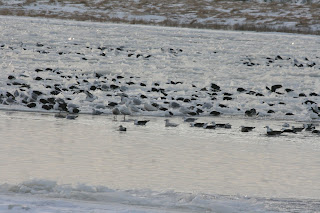 As Dan and I were leaving the Point aux Prairies Park yesterday we spotted a large raft of about 300 mixed gulls, largely Great Black-backed. We quickly noticed several large whitish gulls mixed in, and set about trying to figure out what they were. I felt they were Glaucous Gull, due to size, forehead slope, and sneaky expression. Dan was leaning towards Iceland Gull, based on a smaller individual with a rounded, smaller head. It looks like we're both right! Try to figure out which is which - hours of fun for the whole family! Thanks Ken Thorpe for the help (and for the redpoll tips).
Posted by Matt Poll at 10:40 AM No comments:

It was a gorgeous sunny day for a winter birding marathon, with close to 25 species seen. Dan and I first stopped in at the Westmount Summit, where the most notable bird was an elusive Brown Creeper. We spotted it in the same remote spot where I saw one way back in 2008. We followed a hot tip about a nearby Great Horned Owl, but all was quiet on that front today.

Next it was back to the Botanical Gardens in the east end, where we hoped to get some more Redpoll experience. We quickly spotted a half dozen birder/photographers swarmed under a berry tree. They were all after a group of four stunning female Pine Grosbeaks. They reminded me of parrots, as they curled around branches to get after the berries, their rumps and heads sparkling orange in the sun. Two of the grosbeaks were much more subdued, with only minimal yellowish colouring around their heads. We later got great close views of a handful of American Goldfinch and House Finch. Coming from quiet Korea(where each foreign birder is issued his own province, haha), it was bizarre to be in the midst of a dozen or so birders/photographers!
At the Point aux Prairies Park we were thrilled to have a close encounter with a massive female Pileated Woodpecker and some White-tailed Deer. In the nearby St-Lawrence River we scanned a large raft of about 300 gulls, with interesting results. So interesting that...expect a gull post in the near future. 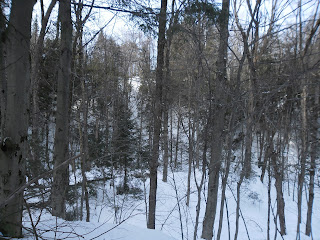 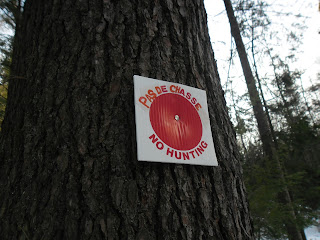 I spent a chilly two days up north at a friend's 'house in the woods'. We went out for a bird walk in a quiet valley and quickly got wrapped up in a mixed bird wave made up of inquisitive Black-capped Chickadees, White-breasted Nuthatch, and a Downy Woodpecker. We also spotted several Red-breasted Nuthatch and Mourning Doves.
As we entered the woods we heard a strange birdsong, one I couldn’t place my finger on. It sounded like perhaps a singing finch. More proof of my woefully poor Canadian birding skills. I’m always trying to compare Canadian birds to Korean birds, which I know a lot better! The eternal expat.
Mammal action came in the form of a ghostly Red Fox, and that was a real treat – it froze when it sensed us, then silently vanished up a hill. Judging from the criss-crossed highways of fox tracks in the area, this valley was downtown Fox City.
We later saw a bronking Common Raven winging past overhead, at one point perhaps chasing another raven or raptor behind the treeline. I asked my friend about Common Redpolls, and although we didn’t see any on the 5th, he has seen them around his house this winter.
In other news, one person got back to me about the 'Redpoll confusion' (thanks Mark Dennis), and it looks to be a Common Redpoll.
I’m still daydreaming about spending the entire spring birding Korea’s Yellow Sea islands. There has been some great vagrant action in Korea lately, with national first sightings of Bufflehead, Bearded Vulture/Lammergeier (possible national first), and Black-winged Kite coming in the past month.
http://www.birdskorea.org/Birds/Birdnews/BK-BN-Latest-Birdnews.shtml