My tarsi are sore.

They're back! At least three Eastern Bluebirds were seen in Mount Royal Cemetery today, in the F1 through F6 area. The males glowed an impossibly vivid shade of blue in the sun, as they followed a female around. Love was most definitely in the air, as I also encountered two Raccoons fornicating in a tree - not something you can ever unsee. And I'm not posting the pictures here - but if you send me 5$... ;)
Also back, a personal spring first Blue-headed Vireo was spotted at the Westmount Summit. It was fairly windy up there, so other than that, relatively low numbers and variety.
I met up with Dan in an attempt to show him the Hooded Warbler, but no dice. We found instead a group of close to 20 birders/photogs, chatting and hanging around. Ominously, just above where I spotted the bird on Wednesday was an active Cooper's Hawk nest. Otherwise, the bird mix there was pretty much what it was the other day.

I woke up with a sore throat yesterday, and didn't do much besides lay around and eat soup. 'Round 11 P.M., as my lids grew heavy and I fought the nod, I had a look at the Québec rare bird website before paying my debt to the sandman. A short entry without an image jumped out and pistol-whipped me. SMACK! "Male Hooded Warbler observed in the arboretum section of the botanical gardens." Huh? My original plan of sleeping off the cold all Wednesday fell by the wayside. Twitching a nutsoids bird like this (less than annual in Québec) is akin to buying a lottery ticket - you don't really expect to win, but it's usually worth paying for the daydream - the possibility of winning.
As per usual, when I got there gloomy and early this morning, the weather forecast was woefully inaccurate - it rained light and steady for several hours. Not a cold rain, so no matter. After three hours of wandering (the arboretum is a painfully expansive area), no sign of the bird. "Maybe it moved on with the rain," I muttered as I stepped in another epic mud puddle with my holey shoe. Voot.

As I moped through the western section of the arboretum, all at once I smelled the bird - I knew I'd see it. Shortly after, I bumped in Jean-Sebastien Mayer, the king of Mount Royal Cemetery. We chatted for a couple of minutes, and then, 20 feet away, a small olive bird flashed past us. "That's it!" It was. The spectacular bird fan-tailed its way through the trees for a few minutes, before zipping away low along a fenceline. The lighting was dim, the views were quick, but it was the most outstanding bird I've encountered for some time. Winning ticket!

Two Palm Warblers were present at the Westmount Summit this afternoon - they tail-bobbed their way through the treetops, giving me my first case of 'Warbler Neck' of the year. So much for being a 'ground loving' bird, ha ha.
Interestingly, one was a western breeder (with yellow only on the throat and undertail coverts), and the other an eastern breeder (showing yellow through the face and underparts). Sibley has the 'eastern' breeding in Québec, while the 'western' breeds west of Hudson Bay, but does migrate through Québec (and the winter ranges of both overlap in northern Florida). While the peak migration for the two subspecies differs by about a month, there is a window where both are on the move, and apparently the two are seen together with regularity. I think it's all super neat, in the nerdiest of ways.
Still no Yellow-rumped Warblers or Blue-headed Vireos, hopefully they'll show up within the week.

Went for a late 'n' lazy jaunt down to the St-Louis-de-Gonzague area this afternoon with Dan. As per usual at this location (for some reason), Dan was sitting slumped on rocks fairly regularly - I'm going to get him a coffee I.V. on wheels for next time. No warblers, but quite a lot of icterids about - it was awesome to get decent looks at a Brown-headed Cowbird and a few Rusty Blackbirds. At Marais de St-Timothée, only one Great Blue Heron was spotted, but apparently not nesting - this time last year saw at least three occupied nests at the site.
I may go look for warblers tomorrow, because life is short and boring.
Posted by Matt Poll at 6:53 PM No comments: 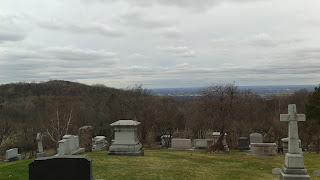 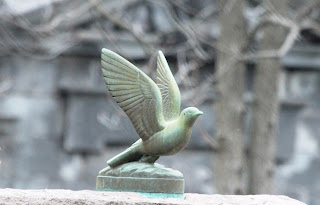 A fruitful warbler quest today, in gloomy weather that was decidedly Novembery, in that the cold felt ascendant, rather than yielding. A Palm Warbler was mixed in with some Dark-eyed Juncos below the lookout at the Westmount Summit, but the flock scattered before I could pick through it, when some dog-walkers came by at just the wrong moment. The Brown Creeper action at the summit has calmed down a bit - there were upwards of a dozen on April 18, cavorting along the trails.

I encountered another creeper at the summit, unfortunately not the good kind. I was horrified to see a portly caucasian gentleman (40-50 years old) with a red ball cap and black hoodie taking a shit off the large cement blocks that sit at the centre of the summit woods. He skulked off without wiping when he was done, like a loathesome troll. And I thought that only happened in Korea.

One Winter Wren was spotted among the rotting logs near Avenue Oakland, easily identified by its double-tap Song Sparrow 'chimp' call. Another two Winter Wrens were in the Mount Royal Cemetery - one on the hill above the cannons, and one on the Pine Hill Side up against Chemin Remembrance.
Another Palm Warbler was flitting through the treetops near the tall pines in E5, this one trying to follow around a mob of Ruby-crowned Kinglets. Hopefully the warbler faucets will be yanked open soon. Make it rain, warbler gods, make it rainnnnn! 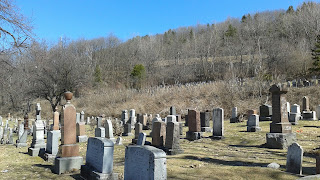 A solid five-hour early spring bimble yesterday turned up 29 species at some local patches, including a couple of surprises. The slope beneath the lookout area at the Westmount Summit was heaving with birds in the morning, including Song Sparrows, Northern Flickers, Northern Cardinals, Dark-eyed Juncos, and best of all, two Fox Sparrows. Initially quite skulky, they eventually came out and fed in the sun and sang, dwarfing nearby Song Sparrows. I’d forgotten how big and chunky they were!
Also at the summit were a confiding Hermit Thrush, and a pair of Brown Creepers, one of which sported the longest bill I’ve seen a member of this species endowed with. Over the woods, a raptor gave an odd call, and when I spotted it I initially thought it was a Cooper’s Hawk - but when it flew off, the buoyant flight on long wings had me scratching my head, until it banked hard and I saw the white rump of a Northern Harrier (a personal first for this site). True to its name, it winged north with purpose.
At my ‘secret spot’, a pair of Eastern Phoebes fed and seemed to be on territory, while Brown Creepers, American Robins, Northern Cardinals, and Song Sparrows foraged restlessly.
The Cemeteries yielded a bit less bird action, but it was great to watch Eastern Phoebes flycatching above a carpet of Dark-eyed Juncos, which darted like ghoulish sprites among the graves. On the way home, a Merlin called noisily over NDG and Décarie.