Bird News from Matt Poll and Youngho Kim, Jeju island, January 30, 2011
Another weekend of blizzard-like conditions on Jeju. In a fallow field near the coast, about 50 Buff-bellied Pipits foraged. At Hado, one of the overwintering Black-faced Spoonbills was seen uncharacteristically close to the road. Aside from the regular assemblage of winter waterfowl, 93 Bean Geese, a dozen Dusky Thrush, a Naumann's Thrush, and three personata Black-faced Buntings were also at Hado.
Near Kyorae, I was happy to finally catch up with about 30 Common Starlings that regularly overwinter there. Several hundred Rooks were spotted nearby. 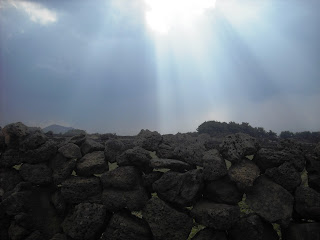 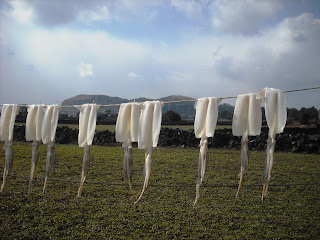 Bird News from Matt Poll, Youngho Kim, and Stephen Krohn
Jeju Island, January 15, 2011
In spite of Blizzard-like conditions on Jeju, we had a great day of birding along the northeast coast. In a golf course pond, perhaps 200 Mandarin Ducks huddled on the bank. Along the coast, several Dunlin, Kentish Plover, Common Sandpiper, Little Grebe, and White Wagtails were seen. Four Black-necked Grebes braved heavy surf, while a nearby assemblage of more common gulls held a Heuglin's Gull, as well as a Glaucous Gull. A Common Goldeneye bobbed in a small harbour. A Western Osprey, a Rook, and a half-dozen Carrion Crow (which favor a small stretch of northeast coast) were also seen on the drive down the coast.
Smaller numbers of ducks were seen at Hado, when compared to the previous two Januaries. About 20 Common Shelduck, a like number of Northern Shoveler, a hundred Spot-billed Duck, a similar number of Pochard, 50 Mallard, two dozen Northern Pintail, and several Eurasian Teal, Gadwall, and Tufted Duck were seen there. Also at Hado were the 15 overwintering Black-faced Spoonbills, several dozen Coot, and about 20 Northern Lapwings.
Further down the coast near Seongsan, four Falcated Ducks, several more Northern Pintail, Pochard, Common Goldeneye and Northern Lapwing, about a dozen Common Mergansers, and a possible Northern Harrier. There has been a noticeable lack of loons on Jeju this winter.

Earlier in the week in Seogwipo (MP only), a riverside park held about 50 Mandarin Ducks, a dozen Pale Thrush, two dozen Dusky Thrush, a White's Thrush, a female Red-flanked Bluetail, several Daurian Redstarts, while plentiful Great Tits and Japanese White-eyes made the bushes come alive. There has been a Eurasian Siskin explosion on Jeju this winter. In 2009, I saw none, in 2010 I spotted several, whereas this year I have noticed large flocks (40+) in several locations.
A Black-legged Kittiwake and three dead and oiled Black-throated Loons were spotted in the harbour.
In a farmer's field at Hanon Crater, a massive Greater Spotted Eagle lazily fled from the relentless attacks of a Eurasian Magpie. An Eastern Buzzard also glided over the field.

(*Note: This is a “historical post.” Whereas I started birding in Korea in 2005, this blog has only been active since early 2012 - these posts are an attempt to consolidate my early birdventures from the various blogs and websites where they reside, largely from the “Archived Bird News“ section of Birds Korea’s excellent website: http://www.birdskorea.org/Birds/Birdnews/BK-BN-Birdnews-archive.shtml. Find more historical posts by clicking on the "Historical posts" tab at the bottom of this post.
For this post, most of images are lamentably poor-resolution screensaves, as many of the original photo files were lost in the infamous computer crash of 2011.)
Posted by Matt Poll at 9:49 AM No comments:

After writing the Mara-do article, I was cajoled into writing a longer piece for The Jeju Weekly. The highlight was getting to interview Kim Eunmi and Kang Changwan at the Jeju Wildlife Centre, who had a sobering view on development and conservation on Jeju Island. Here's the article, and the original link:
http://www.jejuweekly.com/news/articleView.html?idxno=1189