The winds giveth! At about 8:15 a.m., I was in the northwest corner of the Notre-Dame-des-Neiges Cemetery, along the fence that divides the cemetery and the forest on the Université de Montréal grounds. I heard a distant, weak Cuckoo call that sounded a bit like a dove: too-too-too-too (which Google translated to “trop-trop-trop-aussi” in French, which means “too-much-too-much-too-much-also”). I popped through a hole in the fence, ate facefulls of spiderwebs, and tracked the call through the woods for 15 minutes.
I finally saw the bird on the hill behind CEPSUM, a Yellow-billed Cuckoo! It was hard to get a decent look at, until I got an assist from two cross Red Cardinals. They harassed it from the brush and up onto a bare tree branch (listen for them in the video). I got good looks at the uncommon and enigmatic bird for about three minutes, before it flew north towards the football stadium, and it was not seen again. I contemplated following it further, but when I heard the boisterous hollerings of an enraged lunatic coming from the woods I casually turned around and went back the way I had come. He sounded...cuckoo.
The whole YBCU encounter may have been cloaked in a veil of dark vs. light magic, missing time, possible alien abduction, and a menagerie of malicious forest spirits. Perhaps that aspect of things is best left for short story fodder.
Yadda yadda yadda there were some other birds in the cemeteries too, yadda yadda yadda. 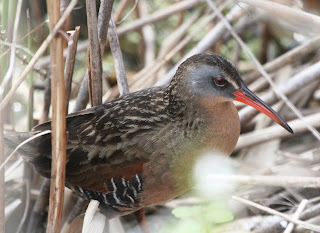 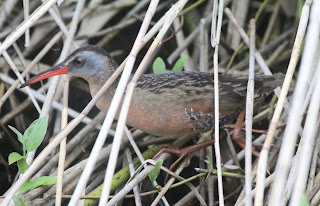 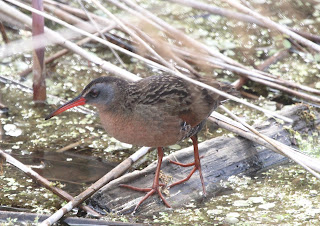 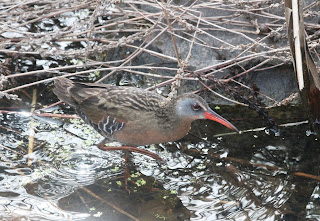 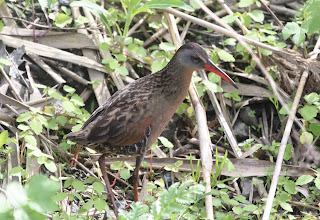 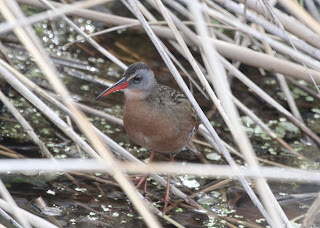 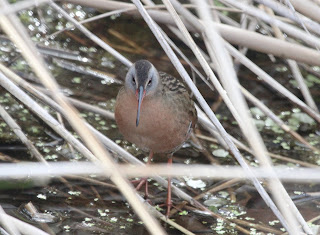 Ditch Chicken! I finally saw a Ditch Chicken! A ridiculously close look at a Virginia Rail was the hands-down highlight of a 44 species afternoon at the Technoparc – and probably of my Montreal birding year to date. Long-awaited lifer!
The bird was spotted far from the oft-visited swamps at the site, and I was dealt a fairly thick slice of luck when I first spotted a ‘mini-Moorhen’ zip through the edge of my peripheral vision. It was super skulky at first, but after a while it...you know what? This encounter was so similar to my first brush with an Eastern Water Rail in Suncheon in October of 2015 (Click here to compare and contrast rail details) that I’ll just plagiarize that account, with several minor amendments:


“...the best bird of the day by far was an Eastern Water Rail a Virginia Rail skulking in a reedy ditch. After catching a quick ‘Moorhen-like’ view of it scuttling to cover, I lay on the ground stood still, and after a few minutes, the bird came out and fed among the reeds. I spent an amazing 30 minutes watching it sneak around the murky reedscape. At times it vanished, only to burst from cover and comically skid to a stop, like a reluctant performer being pushed on stage.”

The winds giveth, and the winds taketh away

The southerly winds have been takething more than they’ve been givething of late, that’s how it goes – everybird must get up to their boreal breeding grounds, innit. A quiet day in the cemetery (37 species), especially when compared to the warblo-palooza of just a few days ago.
I spotted what I suspect was the same Gray-cheeked Thrush from the 22nd, just hanging out in its little spot. I’ve got a post brewing about the Bicknell’s/Gray-cheeked "Catharus conundrum," so that oughta be good for a laugh.

Geez, I haven't been to the Westmount Summit once this year, oh well. I have my reasons.

It’s starting to get “Dan passing out” hot out there. We got some fantastic looks at Blackpoll Warblers at the water’s edge at Halte des Pêcheurs in St-Louis-de-Gonzague. Oddly, I ticked my first Blackpolls at the exact same spot...on May 24, 2016. Neer-neer-neer-neer, neer-neer-neer-neer (Twilight Zone theme).
We didn’t end up seeing any of the more coveted reed-skulking species at Marais St-Timothée, but it was great to see American Bitterns again, and, my birds of the day, Least Sandpipers. They displayed an interesting range in plumage coloration, and oh how they skittered. Dan thought the Marsh Wrens were goofy and hilarious.

Big warbler day! The warbler waves started shallow in the early morning, until I stopped at a large tree where a field in northern NDN meets the UofM woods. A trickle of warblers percolated through the tree when a breeze picked up, and I chuckled when I realized that I’d just seen single examples of 10 different species – it was like looking at the first page in the warbler section in the field guide!
The warbler waves intensified in Mount-Royal Cemetery, and by midday, every flowering tree was aquiver with mixed warbler balls, notably Tennessee Warblers. Trying to ID Orange-crowned Warblers among all that was a nightmare, but there were a few out there. The 6-hour (8:00 a.m.-2:00 p.m.) walk produced a count of 60 species, a satisfying way to wind-down what I think of as ‘golden week.’ Ow, my neck, ow ow ow. 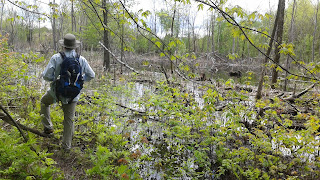 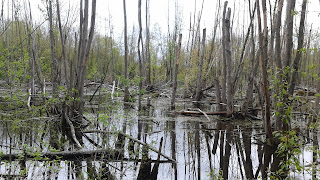 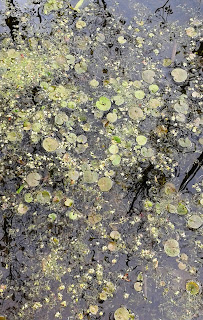 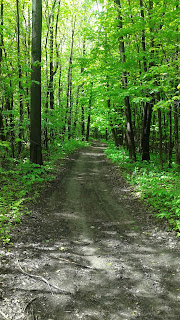 Spent a day getting Joey buckets of lifers, mostly warblers. Lucky feller, I miss getting loads of lifers. The Boisé Ste-Dorothée woods were just lovely – birdy (62 species), quiet (as in no other humans), and remarkably unbuggy for this time of year. I imagine the place will be a mogie hellhole in another week. That was the case when Dan and I went there a couple of Junes ago to dip on some nutty warbler, when we got chomped up big-time. Unless of course it's a horrific sign that the bugs are almost all gone and we're all screwed.
The bird action didn’t let up when we got to Joey’s backyard – we were still ticking off lifers from the back porch! It was badass to watch Blackburnian Warblers (among others) while sipping mojitos at dusk. A short walk to the nearby ‘Woodcock Fields’ after sundown did not produce any namesake peent calls, but we did spot a couple of Common Nighthawks feeding over the field, which was super-cool to see. We used to have those over NDG. Used to.
Haven’t been taking so many pictures lately, as my camera is a steaming piece of feces, and it’s hunchback-heavy.