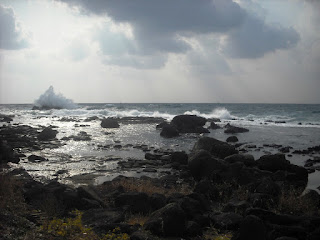 Bird News from Matt Poll and Youngho Kim, Jeju island, November 27, 2010
At the base of remote grassy cliffs on Jeju's west coast, two Asian Rosy Finches were spotted when they braved extremely strong winds and came down to drink trickling fresh water. Earlier in the day, Youngho saw about 30 Asian Rosy Finches in the same spot, and last week one of Youngho's friends saw as many as 180 on these cliffs. At Yongsu, two Bean Goose, a dozen Coots, and about 150 Spot-billed Ducks and Mallards. Along the west coast, several Little Grebes, Common Sandpipers, five Pintails, 50 more Spot-billed Ducks, as well as an Osprey and a Peregrine Falcon.
After parting ways with Youngho, I spotted several Olive-backed Pipits, a dozen Hawfinch, and several Pale Thrushes in a hilltop park in Seogwipo. In another park, a Striated Heron has been seen in the same spot on a small river for the third winter in a row. Also in the park was a female Pintail, two dozen Mandarin Ducks, and a circling Northern Goshawk.
And here’s how I reacted at the time, candidly:

This bird is super rare here, it's been seen less than ten times in Korea. On Saturday afternoon my Korean birding buddy tipped me off about the finch, and I jumped on old whitey and scooted out to meet him near Sanbangsan on the southwest coast. The scoot out woke me up - it was super windy, and I was fighting hard not to get blown into adjacent lanes by the robust gustiness. Once I met up with Youngho, we drove up to a remote cliff on the west coast. We had to scale down this insane cliffside using a haggard old crumbling path. Once at the bottom, we stared up at the cliff for ages, hoping to get finch-lucky. What didn't help was the fact that the tide was all the way in, which meant frigid ankle-deep seawater every few seconds. Also unhelpful, vis-a-vis trying to find the birds were the gale force winds. Woke my ass up even more though. After ages, two of the elusive pinky finches came down for a drink. I about lost my mind. I crept up and got a few decent shots. High fives! Happy happy day. I have a headache.

Seogwipo, Jeju Island, November 16, 2010
A crisp sunny day for a walk through my patch of parks in Seogwipo. The first few Jeju winter specials were spotted in a riverside park - several furtive Pale Thrush, a foraging Red-flanked Bluetail, several Japanese Bush Warblers, a Grey Wagtail, and numerous Japanese White-eyes were seen. On the river, about 25 Mandarin Ducks mingled with a like number of Spot-billed Ducks and six Little Grebes in winter plumage, while a smartly-marked Eurasian Magpie scolded me from a nearby tree. Also in this park were several Great Tits, a Daurian Redstart, and a White-backed Woodpecker.
A Chinese Pond Heron crept through a nearby field. This is the second Chinese Pond Heron in winter plumage I've seen on Jeju in the past two years - perhaps they're expanding their winter range northwards?

(*Note: This is a “historical post.” Whereas I started birding in Korea in 2005, this blog has only been active since early 2012 - these posts are an attempt to consolidate my early birdventures from the various blogs and websites where they reside, largely from the “Archived Bird News“ section of Birds Korea’s excellent website: http://www.birdskorea.org/Birds/Birdnews/BK-BN-Birdnews-archive.shtml. Find more historical posts by clicking on the "Historical posts" tab at the bottom of this post.
For this post, most of images are lamentably poor-resolution screensaves, as many of the original photo files were lost in the infamous computer crash of 2011.)
Posted by Matt Poll at 4:58 PM No comments: