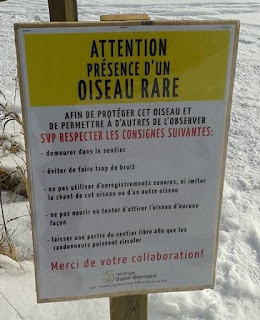 Ile Saint-Bernard, January 29, 2017
Dan and I went to Ile Saint-Bernard yesterday, always a lovely spot. Initially sunny, a huge snow squall pushed through around noon. I liked it. There was a pair of Great Gray Owls around, but we were too cool to hang around the scrum - too cool for those squares, daddy-o. I actually loathe being around such a scene. That's just me. Anyway, we found our own Great Gray a few years back at the Arbo (http://snowyowllost.blogspot.ca/2013/01/montreal-morgan-arboretum-january-16.html). I got a kick out of watching Song and American Tree Sparrows interact.
Posted by Matt Poll at 9:58 AM No comments: 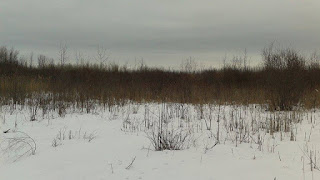 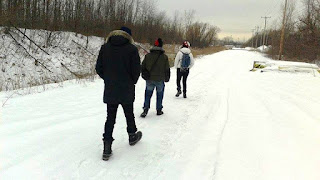 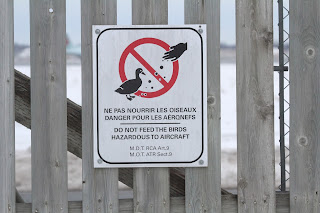 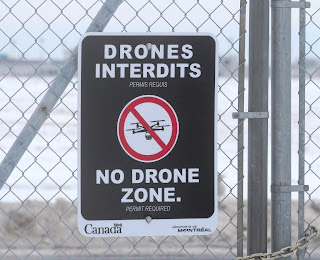 Yesterday Dan and I met up with McGill Students’ Birding Club members Anita and Shrijeet for an early morning session at the Technoparc. It was refreshing to bird with these passionate young birders. We had unseasonably balmy above-freezing temperatures, although our morning’s birding was set amidst the fairly depressing backdrop of ongoing noisy construction at (destruction of) the Technoparc site. The site boasts one of the highest species counts for the island of Montreal, including an impressive array of breeding water birds last summer, including Green Heron, Virginia Rail and Sora.

Unfortunately, the degradation of the prime wetland habitat is well underway, in preparation for the construction of the ‘Hubert Reeves Eco-campus ’, ironically named after a well-known ‘popularizer of science’. This monkey business is frustrating as hell, but it’s a familiar song after having lived in Korea for close to a decade. Same shit, different continent. Lucre, disinformation, greenwash. It’s ok to wipe out this ridiculously productive wetland because...because...we’re calling it an ‘Eco-campus’! Yep. Fake news!
Our target species was Long-eared Owl – I’ve only seen this species on one previous occasion (a quick encounter with an individual unfortunately being hunted by a Goshawk last year in Suncheon: http://snowyowllost.blogspot.ca/2015/11/suncheon-october-26-november-15.html. I’d forgotten how relatively small they are, in spite of echoing the morphology of the much larger Great Horned Owl. We also had a brief encounter with one of those impressive birds a bit earlier on.
We found the Long-eared Owl, still in the tree where Shrijeet first discovered it several weeks ago. Four photogs were huddled directly beneath the tree, snapping away at the owl, which had its tufts up in an alert posture. I always get a queasy feeling when it comes to witnessing photogs interacting with owls. I know, I know - I have a camera and I took a picture of the owl. I’d like to think the fact that we didn’t get as close, and were in and out in 20 seconds (as opposed to camping out and getting all up in the bird’s face) meant something - that there was a line in the snow that we didn’t cross. I dunno. I guess the stern words of Dr. Nial Moores still echo in my ears when it comes to birding ethics, especially where owls, a much sought after group of birds, are concerned. Over the years I’ve avoided photographing owls, posting images of owls, and even mentioning certain owl sightings, when I thought that the bird’s welfare was in question. Anyhow, that’s my rant, now give me my ‘Saint of Birding’ halo. Toss it up to me on my high horse.
There were reports of Snow Buntings and a Snowy Owl being sighted near the runways of the Trudeau Airport recently, but no dice yesterday. Shrijeet’s little bridge camera was badass, by the way. It made me re-evaluate my antiquated boat anchor. My New Year’s resolution? Get on eBird. I’ll do it soon.

In pleasant enough January weather, I took a leg-numbing walk from NDG up through Westmount and the cemeteries. The summit and oratory area were very quiet, as was the Notre-Dame-des-Neiges Cemetery. I do think there are some Eastern Screech Owls or Northern Shrikes in there somewhere, as it's a vast space with potential, in spite of the bulk of bird activity being confined to the Mount Royal Cemetery just over the fence (Dan and I have spotted Great Horned Owls and Northern Mockingbirds there at this time of year, so there's hope).
After squeezing through a gap in that fence, I saw some photographers congregated on a rise in the Oak Ridge sector, clearly in search of the long-staying Townsend's Solitaire. I wasn't in a chatty mood, so I wandered south. I stopped in a small copse of trees (in A4 bordering on L2) when I heard a strange, intermittent squeak over the rush of wind through pine needles. It took me about five minutes of listening to realize that I was hearing two trees rubbing together, but just as I was about to carry on rambling, a medium-sized passerine flopped down onto a bush perhaps ten feet ahead of me. It was the vaunted Townsend's Solitaire, and it eventually flew up to perch atop a tree, before some passing crows caused it to dematerialize in a puff of smoke.
Another highlight was a leisurely look at a group of House Finches in a brief slice of sunshine. Best looks I've had in a while, and they really reminded me of the Pallas's Rosefinches I saw in Korea: (http://snowyowllost.blogspot.ca/2016/01/suncheon-december-24-january-9.html)