It's upsetting to see such beautiful wild birds with their wings clipped, in a small pond in a hotel lobby. See the full report here (expertly co-written by Dr. Nial Moores):
http://www.birdskorea.org/Birds/Miscellaneous/BK-BM-Mandarin-Ducks-in-hotel-lobby.shtml 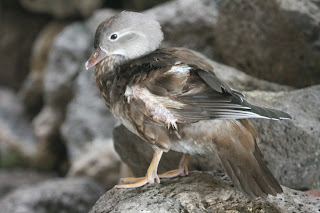 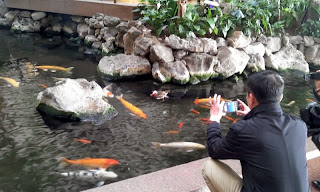 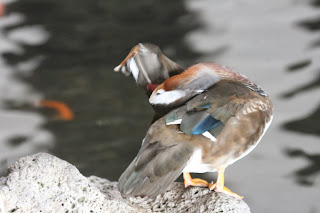 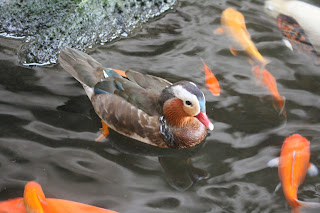 
Time flies. I've been doing a lot of birding in my local patch mostly, and the Seogwipo area isn't as birdy as it was even a few years ago. Some of the best little spots are getting degraded/noisy, as the whole island becomes increasingly developed for lucrative tourism. Yay.

A trip to Mara-do on October 20th was very quiet - my attempts to visit the island when it was going off a few weeks earlier were repeatedly thwarted by unreliable ferry service. A trip to the 'Recreational Forest' the same day led to some great close looks at some Varied Tits and Yellow-throated Buntings, and a brief glimpse of a Eurasian Wren.
I went up north a few weeks ago to hang out with the Birds Korea boys, I'll write about that soon, perhaps.
There was an Imperial Eagle spotted on Jeju the other day, I'll try to check it out on Sunday. It's getting cold on Jeju.
Posted by Matt Poll at 7:51 AM No comments:

This awesome little bird is in the fight of its life - there are less than 200 left. Read about what Birds Korea is trying to do to help:
http://www.birdskorea.org/BK-Startpage.shtml
Posted by Matt Poll at 8:28 PM No comments:

With the ferry to Mara-do cancelled due to high winds, I had to settle for a ramble around the west coast. On the southwest coast, I watched a Chinese Sparrowhawk as it loomed over a large flock of Tree Sparrows cowering in a large thicket of scrub. The sparrowhawk appeared to have a deformed bill. Nearby, I thought I saw a Black Drongo drop down from a power line as I was riding past, but I was unable to re-find the suspect bird.

On the way back to Seogwipo, I stumbled on a prime bit of habitat in a quiet farming village near the west coast, featuring a stream lined with large old Hackberry trees. Mixed in among a flock of perhaps 30 noisy Brown-eared Bulbuls was a similar number of Chestnut-cheeked Starling. They were mostly sticking to the treetops, moving up and down the river in smaller groups. It was nice to see this attractive bird in such numbers, as I’ve only ever encountered the occasional single bird in spring.
Posted by Matt Poll at 8:22 AM No comments:

A lovely sunny day off for a long drive around coastal sites mostly on the east coast of Jeju. Shorebird numbers were pretty low, and the winter ducks have yet to arrive in force, with mostly single-digit numbers of Spot-billed Ducks at most sites. Several early Garganey were spotted near Seongsan, in the company of three Black-winged Stilts. Three Little Grebe in summer plumage were seen nearby, as well as single Common Greenshank and Common Redshank. Active Common Sandpipers were noted at most sites, with perhaps two dozen seen on the day. Also in the area, five Eastern Yellow Wagtail. Raptors were represented by patrolling Osprey and Peregrine Falcon.

Hado was very quiet, with a spotty juvenile Grey-streaked Flycatcher seen.
At Pyeoson, 14 Red-necked Stints, as well as several Sanderling and Kentish Plover worked a quiet section of beach.
In Seogwipo, 5 Red-necked Stints fed in the harbour, while the hills around town held two mysterious Cuckoos, which were unfortunately silent. I'll deal with them in a separate post soon. In a riverside park, a female-type Mandarin duck (male eclipse?) with a pink bill paddled on a quiet bit of river. An odd White Wagtail with a buffy-white head (leucistic?) was spotted nearby. Japanese White-eyes were feeding on berries at a number of sites.
Posted by Matt Poll at 9:03 AM No comments:

This is a mega-rarity, previously seen in Korea perhaps three times. Here's the report I wrote for Birds Korea:

I rode out to Jeju’s northwest coast early on Saturday morning in search of a reported Buff-breasted Sandpiper. I arrived at a field just in from the coast that featured a great mix of wet and dry habitats, and waited for the bird to show itself. After almost an hour, a small shorebird flew from the dry scrubby area to the small wetland next to the road – it was the Buff-breasted Sandpiper! I hunkered down low and got some spectacularly long and close looks at it as it paced lazily through the mud at the edge of the water. Such a sleek and regal bird, it was a real pleasure to watch.
Also spotted in this small but productive patch of wetland were low single-digit numbers of Common Snipe, Long-toed Stint, (amorous) Green Sandpiper, Common Greenshank, Common Redshank, Wood Sandpiper, Little Ringed Plover, Pacific Golden Plover, and Dunlin.
The Buff-breasted Sandpiper seemed to be most closely associating with two Pacific Golden Plovers. Outlandish theory time - perhaps it fell in with these birds in their overlapping summer ranges in eastern Siberia and got mixed up and followed them to the ROK instead of its normal South American wintering grounds?
Posted by Matt Poll at 8:27 PM 2 comments:

Here's a report I recently posted on the Birds Korea blog: (http://www.birdskoreablog.org/?p=10038). Here it is if you're too lazy to click on the link...

Bird News from Matt Poll
Jeju Island, early August to early September
July and August were notable for their record-breaking lack of precipitation on Jeju. Water levels were dangerously low at reservoirs across the island, and local farmers suffered enormously. Birdwise, this period saw breeding birds fledging at a variety of sites. Ring-necked Pheasants seemed to grow from pint-sized to full-grown in a spectacularly short time frame. Other birds observed fledging during late summer include Tree Sparrow, Great Tit (many appearing washed-out with a dingy yellowish tint), Yellow-rumped Flycatcher, Brown-eared Bulbul (which look prehistoric when getting their adult feathers in) Japanese Bush Warbler, and Black Paradise Flycatcher at several sites that still remain undisturbed for now. Unfortunately, the voracious pace of commercial land development on Jeju has increased alarmingly over the past few years – it cannot possibly continue like this unchecked.
I have enjoyed watching Barn Swallows cavort within arm’s reach outside my windows all summer, as well as at numerous sites around Jeju. In early August I spotted two Black Wood Pigeons clacking noisily through a nice bit of coastal mixed forest on the south coast, just across from an islet where they breed. Several confiding White-backed Woodpeckers (the official bird of Jeju) also favor this area. Vocal flocks of Japanese White-eye can be found at a wide range of wooded spots, and often mix in with Great and Long-tailed Tits, as well as Japanese Bush Warblers and Eastern Crowned Warblers. In mid-August I got a leisurely look at a large White’s Thrush as it perched on a boulder in the middle of a quiet gully, surveying the area for a good ten minutes. Mid-August also featured Lesser and Oriental Cuckoos calling relatively close to downtown Seogwipo.

On a trip out to the west coast on August 14th I spotted a Far Eastern Cisticola, Little Ringed Plover, and several Far Eastern Skylarks in a productive patch of farm fields. A trip to Chuja-do (one hour north by ferry) on August 18th was very quiet, with perhaps a dozen Streaked Shearwater seen on the sea crossing, and very little bird life in evidence on the island, save for a dead Common Snipe found on a trail and dozens of Pacific Swift high overhead a hill.
An early-September excursion to Mara-do saw a bit more bird activity, with perhaps two dozen Streaked Shearwater seen on the return voyage (but none on the outward trip). The island was veiled with thick clouds of raucous and chattering Pacific Swifts, with close to 130 seen, at one point menaced by a Eurasian Sparrowhawk. Also on Mara were a Brown Shrike, female Black Paradise Flycatcher, Grey-streaked Flycatcher, four Whimbrels, several Buff-bellied Pipits, and an Arctic Warbler.
Last weekend I spotted several young Black Paradise Flycatchers still at a quiet gully. Nearby, an active band of Long-tailed Tits moved through the trees with a small number of Eastern Crowned Warblers. Closer to Seogwipo, I spotted almost 40 Eastern Yellow Wagtails in a large rice field.
Over the past few weeks I’ve noticed a lot what appears to be courtship activity among Blue Rock Thrush, with two or three males chasing each other away from females, and taking turns performing complex songs from the highest possible perch.
Posted by Matt Poll at 8:47 AM No comments: