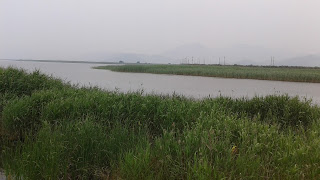 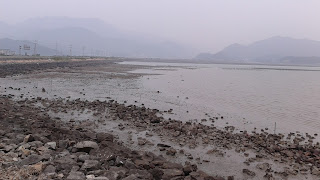 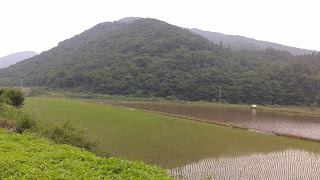 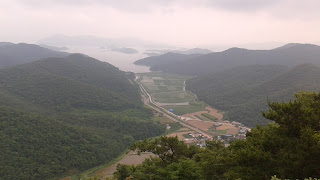 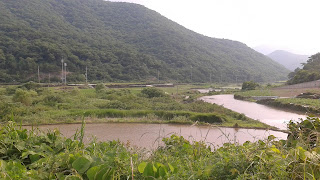 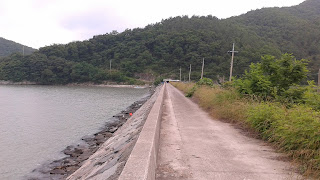 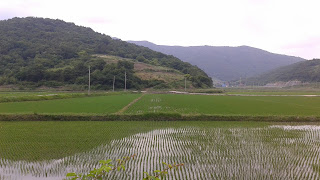 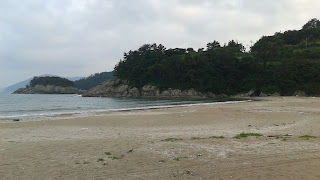 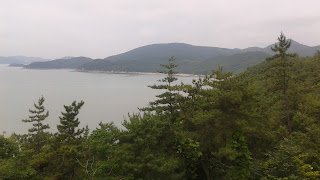 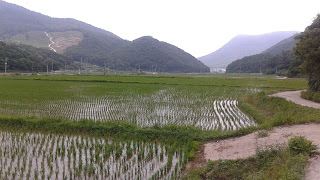 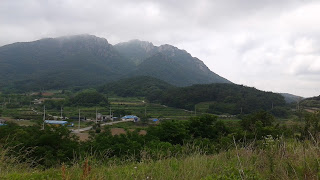 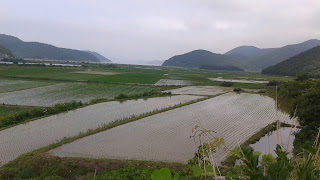 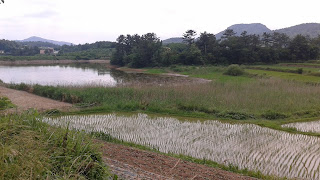 Several satellite-bearing rockets have been launched from Goheung, which has led to it being branded as a silly futuristic rocket-land. That image couldn’t be any further from the truth. Goheung is in fact the most ‘old-fashioned’ bit of mainland Korea I’ve come across. Very little development, and countless valleys filled with stepped rice fields fringed not with concrete ditches, but with wild and overgrown scrub.

I forgot to take pictures of the endless miles of pristine reedbeds as we drove by, because I was busy staring in open-mouthed awe. Forget Suncheon Bay, this is where the reeds are. Most of the reeds are inaccessible, for better or worse, but one can only imagine the hordes of sexy bitterns and rails skulking happily within. Did I mention all the mudflats, quiet beaches, mixed mountain forests, and scrubby fields? The habitat on Goheung was mind-blowing. Can’t wait to see what will be found there during migration.
June is a magical time in Korea - the hills of Goheung were peeping with the sound of newly-fledged juveniles. Young Daurian Redstarts, Common Pheasants, Barn Swallows, Eastern Crowned Warblers, Long-tailed Tits, Varied Tits, Coal Tits, Yellow-throated Buntings, and Tree Sparrows were seen on this trip, in all their clumsy drabness.
A complete lack of calling cuckoos in the area felt notable – up until last weekend most hilly areas were ringing with the calls of 2-4 species. The first species I heard after pulling in and shutting down was a Black Paradise Flycatcher – good start! Two pairs were heard, as well as at least five Fairy Pittas on the same mountain.
Some species that I’m not used to seeing in Suncheon included three Little Ringed Plovers pacing a beach and nervously eyeing a menacingly-perched cat, a flyover pair of Mandarin Ducks, several Meadow Buntings, and a pair of Blue Rock Thrush.
Also noteworthy were a pair of Tiger Shrikes, two Oriental Honey Buzzards, two Striated Herons, dozens of Cattle Egrets in various stages of breeding plumage, two Black-naped Orioles, three Chinese Sparrowhawks, a White’s Thrush whistling all night, and several plump Frog-eating Rat Snakes, which were lurking in rice fields teeming with tadpoles.
At one point, while hanging out at a nice reedy patch at the base of some hills at dusk, I heard...’something’. There were Brown-eared Bulbuls shrieking away, so the aural waters were fairly muddy, but for one brief and quiet moment, I picked up a distant minivet-like trill coming from the hills that sounded more urgent and shrill than your average Ashy Minivet. I don’t even want to mention the name of the bird I think it most sounded like. Ryukyu Minivet. There, I did it. Or of course, it could have been nothing of the sort.
In other news, I’m going back to Goheung this weekend.
Posted by Matt Poll at 8:36 PM No comments:

Jason Loghry came to town on the weekend, and we hit it hard - an epic 15-hour birding session. Read his full report here:  http://www.birdskoreablog.org/?p=15959
Posted by Matt Poll at 8:18 PM No comments:

It feels like summer in Suncheon, with noisy Oriental Reed Warblers in every patch of reeds, Black-naped Orioles calling and nesting, and Oriental Dollarbirds chasing Chinese Sparrowhawks through the hills. On May 30, a Chinese Pond Heron was seen in the company of a dozen Cattle Egrets in a rice field, and on May 31, three Striated Herons, several calling Indian Cuckoos, and a lone Whooper Swan in a small reservoir were notable west of Suncheon.
Nesting Chestnut-cheeked Starling update: First sighted nesting on May 6, when I checked in on May 12, 25 and 29, I saw two to three pairs of Chestnut-cheeked Starlings still attending their telephone pole nests. On the 12th, I saw a pair at a post about one kilometre away from the main site, although it is unclear if this was one of the original pairs feeding, or a new pair. On May 29, the happy sound of peeping chicks was heard from within one nest when an adult returned with food.
On the morning of May 28, I saw some wader-type birds in a rice field south of town, and I was unable to ID them in the field due to the distance and poor lighting. When I returned at dusk on May 31, I was greeted by an owl-like hooting coming from the same spot. After a few minutes of observation, a pair of Greater Painted Snipes revealed themselves at the far end of a rice field. They stood tail to tail for a while, before the male performed a wing-raising display for several minutes in the fading light. I managed to capture several terrible distant record shots. Here’s hoping this pair will breed successfully.
Nearby, just before sundown, the local Eurasian Bittern was spotted as it made a short flight between reedbeds, presumably to roost. Nine Eurasian Spoonbills were seen at considerable distance on the flats, although two of them looked potentially like Black-faced Spoonbills.
On June 2, while on a walk in the hills just northeast of downtown Suncheon with Helly, we heard two Fairy Pittas calling from across a wide valley. Shortly thereafter, a male Grey Nightjar surprised us with a noisy circular flight over our heads, before landing nearby. It was wonderful to finally see this incredible species after only hearing it for so many years.
Posted by Matt Poll at 7:41 AM No comments: